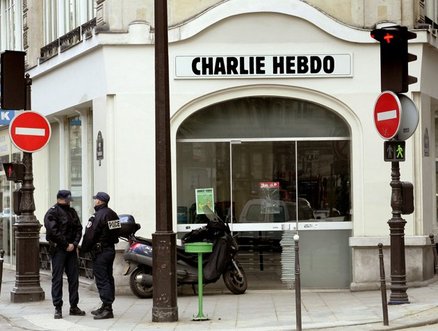 The offices of French satirical magazine Charlie Hebdo, which published a special Arab Spring edition Wednesday with the prophet Mohammed as “guest editor", were gutted in a petrol bomb attack overnight, police said.

The cover showed a cartoon of the prophet stating: "100 lashes if you don't die of laughter!"

The depiction of the prophet is strictly prohibited in Islam.

A witness at the scene, Patrick Pelloux, told Agence France Presse a molotov cocktail was hurled through the window and set fire to the computer system.

"Everything was destroyed," he said.

The magazine's publisher, known only as Charb, said he was convinced the fire was linked to the special edition.

"On Twitter, on Facebook, we received several letters of protest, threats, insults," which had been forwarded to the police, he said.

On Wednesday, the weekly said it would publish a special edition to "celebrate" the Ennahda Islamist party's election victory in Tunisia and the transitional Libyan executive's statement that Islamic Sharia law would be the country's main source of law.

It would feature the prophet Mohammed as "guest editor", the magazine said.

Charb on Tuesday rejected accusations that he was trying to provoke.

"We feel we're just doing our job as usual. The only difference is that this week, Mohammed is on the cover and that's quite rare," he told AFP.

A Paris court in 2007 threw out a suit brought by two Muslim organizations against Charlie Hebdo for reprinting cartoons of Prophet Mohammed that had appeared in a Danish newspaper, sparking angry protests by Muslims worldwide.

What is sacred for the members of one religion is not necessarily respected by others. Those who fail to accept this fact do not belong in the free world!

islamists and so narrow minded and have a total lack of humour...

This is what democracy is about
You want to live in democracy, you must respect others opinions
It is not necessarily the best practice to insult peoples religions
But the more criticism you give these writers, the more money they make.
Think about it!

I fully agree by your comments but in the french system, denying the Holocaust will surely end you in prison, while cursing and defaming prophets and religions will not.
Is this the democracy you are talking about, is this other people opinions respected?

Denying the holocaust is not the same as posting a cartoon about a "prophet". The holocaust happened and we have seen it in these ages. we dont worship jews or the holocaust, but we dont deny it happened. Muslims are respected and aloud to have their own opinion in all democratic countries(which isnt the same to say about Christians and Jews in most Arab countries); but that doesnt mean anyone else isnt aloud to have their opinion that islam isnt the right religion whether you like it or not. So in a DEMOCRATIC free country they should have the right to publish whatever they want. To them your "prophet" isnt a prophet ...