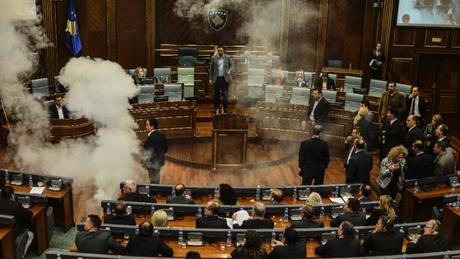 Opposition MPs in Kosovo on Thursday disrupted a parliamentary session by releasing tear gas into the chamber for the second week running, in protest at agreements made with Serbia.

Despite tight security at the entrance to prevent a repeat of last week's chaotic scenes, the deputies managed to sneak canisters into the parliament and open them before proceedings began, said an Agence France Presse journalist at the scene.

The protesters are angry at EU-brokered dialogue and agreements with Serbia, particularly a plan to set up an association of Serb-run municipalities giving Kosovo's Serb minority greater autonomy.

About 100 supporters of the protest gathered outside and cheered as MPs left the building after the parliamentary president was forced to call off the session.