Iran's Boroujerdi in Lebanon for Talks with Senior Officials 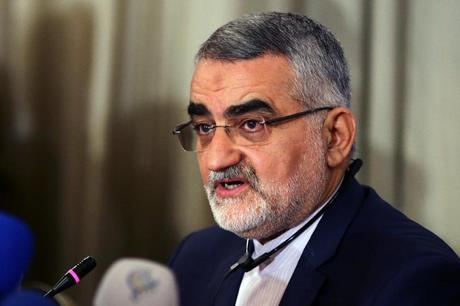 He said after talks with Salam: “We hope that next time we come to Lebanon, we would be able to visit the Baabda palace.”

“We expressed to Salam Iran's support for the political and national dialogue among all parties and hope that it will achieve its goals for the sake of the high national interest,” he added.

Following talks with Bassil, he revealed that the foreign minister will travel to Iran on Saturday where he will hold a series of meetings.

Al-Joumhouria newspaper had reported on Friday that the Iranian official will meet with Foreign Minister Jebran Bassil and MP Mohammed Raad, head of Hizbullah's Loyalty to the Resistance bloc.

Boroujerdi arrived in Lebanon from Syria where he met with President Bashar Assad.

The Iranian official had last visited Lebanon in January where he held talks with Speaker Nabih Berri, Salam, and Nasrallah.

This is how minorities are treated in Saudi Arabia -

How is christians treated bad in Iran? They have Churches they can visit whenever they like, they can celebrate Christmas and do everything according to their religious beliefs.

Only thing they can't do, all women in Iran have to wear a scarf, and all alcohol is banned.

Those two things are the only precautions they have. Don't forget Maryam al 3adra wore a scarf aswell, so I can't see how these issues are threatening to Christianity.

Now compare that to Saudi Arabias and ISIS wahabi idealogy.

"the release of Maryam Rostampour, 27, and Marzieh Amirizadeh, 30, today. For almost nine months the two Iranian Christian women have been held in the notorious Evin prison in Tehran for refusing to deny their faith."http://www.christiannewswire.com/news/6356312210.html

a few examples of how chrstians are well treated in iran....

Remind us of that next time the Saudi gulf delegation arrives.

Iran has an objective of creating an Islamic Republic, which might please you, but it is rejected by a majority of the people.
Iran has created an army inside Lebanon (this is not seen anywhere else on the planet).
Iran directs the politics and give orders to many Lebanese of the Shi3a community. A few years ago, Shi3a were more than my friends, like brothers. Today they have destroyed the most precious characteristic of Lebanon : "National Unity" and the "Living Together".
Today this Army has destroyed the Institutions, the economy and is paralyzing the whole country.
Today this Army has become the "state in place of the state": it decides for all of us "what it wants, when it wants".
Today this Army is working for creating a "void" and destroying the "National Pact" to replace it by a "Mutelateh"...and will continue the destruction until it is imposed by force.

Today this Army is using a mentally ill person and manipulating him for its own benefit.
Today this Army is disliked by more than half the population, thus creating fears which result in divisions and hatred.
Today (and yesterday) Iran has claimed time after time that Lebanon is part of its "National Security"
Today we see our Shi3a brothers as loyal to Iran and NOT Lebanon.
Today we see our Shi3a brothers drifting away from the "Common good" and from the "Common values".

Now about the "Army":

Ebola lures & bribes the lower class to work in their illegal hash growing, Drug smuggling narcotics manufacturing businesses as well as in the case of Brital - stealing other people's properties and reselling them - while providing them protection from the law for a certain percentage.
And putting their hands on other people's lands & residences then exploiting those illegally seized properties to their profits.
Ebola prefers to engage in illegal businesses like the 17 Tons of Drug Manufacturer of Nabatieh. Or the Hash growers of Baalback and Hermel, the Thieves of Brital, the Kidnapping for ransom gangs of Baalback (recently snatched the 5 Czech).
Or the ALI MERHI SHIPS caught with 85 000 kg of Coke...
Ashrafu al nass...

hope u have some good news & good advice so the Lebanese political mechanism can re-load!

well done @brobozel bro, 12 votes means you are not only popular but also right.

51 minutes ago Boroujerdi after meeting Salam according to VDL (93.3): We hope that next time we come to Lebanon, we would be able to visit the Baabda palace.

I think this is your last visit to Lebanon.

it was so 6ual

7-Iran spreads in Lebanon a backward culture...(never before we could see so many women in black tchadors from head to toes in the streets or even on the beaches...).
8-Iran wants to create an Islamic Republic in Lebanon.

Is this not sufficient to make of Iran an enemy?

Some ask : "why Iran is an enemy?"
1-Iran has an army inside Lebanon trying to take over the whole country.
2-Iran is feeding this army with money, weapons and military advisers.
3-Iran is directing, commanding and ordering this army, which is obeying to Iran and doing wars against the interests of Lebanon.
4-Iran has interests opposite to the interests of Lebanon: namely against developing National Unity and working for peaceful solutions in the region.
5-Iran wants to reach the Mediterranean sea through South Lebanon for extending its regional power...and making more wars..
6-Iran has kidnapped almost the entire Lebanese Shi3a community and made of it an extremist community... Their loyalty is to Iran and not to Lebanon.

7-Iran spreads in Lebanon a backward culture...(never before we could see so many women in black tchadors from head to toes in the streets or even on the beaches...).
8-Iran wants to create an Islamic Republic in Lebanon.

Is this not sufficient to make of Iran an enemy?

Important Remark:
As a Christian I would like to see Sunnis, Shi3as, Druzes, Christians living together like brothers (truthfully and really).
To achieve this we must unite together and stop looking for help from the outside.
When we unite and appreciate each other we will bring great prosperity to our people and won't need outside help.
We need to concentrate on bringing hearts together and creating a solid and unbreakable TOGETHERNESS.
This is not a dream, this can be accomplished if we want it.

when it comes to terror, he is the ONLY official.