Netanyahu Warns against Vigilantism after Eritrean Killed by Mob 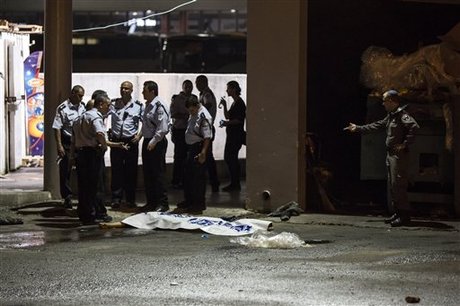 Prime Minister Benjamin Netanyahu warned Israelis against vigilantism Monday following the death of an Eritrean man mistakenly shot and beaten by a mob during an attack in which a soldier was killed.

More than two weeks of unrest have raised warnings of the risk of a full-scale Palestinian uprising, while some Israeli politicians have urged residents to arm themselves to fend off the threat of stabbings and gun assaults.

The attacks, and violent protests which have erupted across Israel and the Palestinian territories, have prompted a range of security measures, while Israel has rejected a proposal for international observers at a key religious site.

"We are a law-abiding country. No one must take the law into their own hands," Netanyahu told officials from his Likud party after Sunday night's incident in the southern Israeli city of Beersheba.

The mob violence came after a gunman also armed with a knife stormed a bus station in Beersheba, shooting dead 19-year-old soldier Omri Levi and wounding around 10 others.

The gunman, identified as 21-year-old Arab Israeli Mohannad al-Aqaby, was killed, while a security guard at the bus station shot the 29-year-old Eritrean thinking he was a second attacker. A mob also beat him, Israeli media reported.

Video that spread online appears to show the Eritrean lying on the ground after being shot and receiving blows to the head and body from angry bystanders.

Police identified him as Habtom Zarhum, with Israeli media describing him as an asylum seeker, like many Eritreans who have come to Israel.

The police promised an investigation, saying they "considered this incident as extremely serious."

Sari Bashi, the Israel/Palestine director at Human Rights Watch, called the death a "tragic but foreseeable outgrowth of a climate in which some Israeli politicians encourage citizens to take the law into their own hands".

Aqaby was one of the few Arab Israelis, who make up 17.5 percent of Israel's population, to allegedly carry out attacks in recent weeks.

The Arab Israeli mayor of Hura, where police said Al-Aqaby was from, condemned the attack.

"We utterly and unreservedly condemn this despicable act and reject violence of any sort," said the mayor, Mohammed al-Nabari.

The relentless violence has defied an Israeli security crackdown as well as international calls for both sides to calm tensions.

Many of the attacks have seen young Palestinians with knives stabbing Israelis before being shot dead.

At least 41 Palestinians have died since the start of the month, including alleged attackers, while eight Israelis have been killed.

Clashes at the Al-Aqsa mosque compound between Israeli police and Palestinian protesters in September preceded the current wave of violence.

Muslims fear Israel will seek to change rules governing the site, the third holiest site in Islam, which is located in Israeli-annexed east Jerusalem.

It is also the most sacred site for Jews, who refer to it as the Temple Mount and who are allowed to visit but not pray there to avoid provoking tensions.

Netanyahu has said repeatedly he has no intention of changing the rules.

Israel summoned French ambassador Patrick Maisonnave on Monday over his country's proposal to send international observers to the compound, a suggestion rejected out of hand by Netanyahu.

U.S. Secretary of State John Kerry, due to meet separately with both Netanyahu and Palestinian President Mahmoud Abbas in the coming days, backed Israel's position.

Kerry also renewed his call for an end to the violence, while adding that "Israel has every right in the world to protect itself."

Most of the Palestinian attackers appear to have been acting on their own. On Monday, Netanyahu argued that online extremism was influencing attackers.

"What we see here is the merging of extremist Islam and the Internet. It's Osama bin Laden meets Mark Zuckerberg," he said, referring to the Facebook chief.

Checkpoints have been set up in Palestinian areas of east Jerusalem, where the majority of attackers have been from, and some 300 soldiers have begun reinforcing police.

On Sunday, Israel controversially began erecting a temporary wall between the east Jerusalem Palestinian neighborhood of Jabel Mukaber and Jewish neighborhood Armon Hanatziv to protect it from firebomb and stone attacks.

Netanyahu has come under heavy criticism over the attacks, while Abbas' calls for peaceful protest have failed to stop frustrated youths fed up with his leadership and Israel's right-wing government.

So anyone who doesn't look like a Slavic invader is fair game...

Then you might also know that ME Jews are treated like second-class Jews (yes, of course there are tokens in the government). The Ashke-Nazis are the most racist of Israelis, so of course they'll be more trigger happy when a swarthy fellow shows up among them. They still brag about being "Europeans".