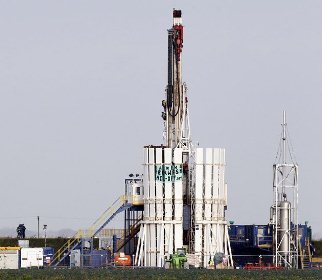 The only company in Britain using hydraulic fracturing to release natural gas from shale rock said Wednesday that the controversial technique probably did trigger earth tremors in April and May.

But a report commissioned by Cuadrilla Resources, which is drilling for gas in the area outside the northwestern English coastal resort town of Blackpool, cautioned that the tremors, measuring 1.9 and 2.8 on the Richter scale — were due to an unusual combination of geology and operations and were unlikely to happen again.

Cuadrilla is the only company currently extracting shale gas using hydraulic fracturing — a controversial technique by which a mix of water, sand and chemicals are pumped deep inside underground rock formations to free the gas.

Fracturing operations were suspended on May 27 following the detection of a tremor centered just outside Blackpool.

The company said operations would remain suspended while the company and government officials study the report.

The use of fracturing, colloquially known as "fracking," has increased dramatically in recent years, particularly in the United States, and residents and environmental activists have raised concerns about the potential impact on water quality.

Critics say fracking could poison water supplies, while the natural gas industry says it's been used safely for decades.

Nick Molho, of environmental charity WWF, said that Wednesday's findings were likely to add to the "very real concerns" people had about fracking.

But the report estimated that in the "unlikely scenario," that fracking kicked off another tremor, its maximum magnitude would be about three — meaning it would probably barely be felt if at all.

Meanwhile campaigners who oppose the fracking swooped in on one of the company's rigs in a protest against the industry.

In a statement, Cuadrilla said it believed that there were "five protesters on site, four of whom are attached to the machinery."