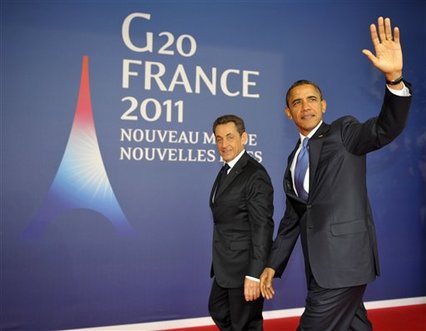 The leaders of the world's most powerful economies confronted a new financial crisis Thursday as they began a G20 summit with markets in plummeting and Greece facing a forced exit from the euro.

As France and Germany tried to bully Athens back into line, the Eurozone debt crisis threatened to engulf Italy, which saw the costs of its borrowing hit record highs amid fears over Europe's bail-out mechanism.

Asian and European stock markets plunged, as storm clouds gathered over the seafront at the rain swept French resort of Cannes, where the G20 leaders had gathered to implore the Eurozone to put its house in order.

Italy's long-term borrowing costs hit 6.4 percent, which observers warned was unsustainable, and markets across Europe opened down between 1.5 and 2.5 percent amid fears over the growing threat of a Greek default.

He was summoned to pre-summit talks Wednesday and agreed to hasten his planned referendum on the plan, insisting Greece wanted to stay in the euro, but he flew home to find his parliamentary majority evaporating.

Merkel and Sarkozy had warned him that Greece would not receive "one more cent" of the IMF and EU's next planned eight-billion euro aid installment until he wins the referendum, which he wants to hold on December 4.

Without these funds, senior officials in Cannes said, Greece might not be able to pay government employees after this date -- and could face a messy debt default which would force it to leave the European single currency.

Papandreou insisted it is the "democratic right" of the Greeks to vote on the bailout plan -- which foresees more tight austerity measures -- but added: "I believe that the Greek people want to be in the Eurozone."

But conceded that his referendum puts this at stake, "this is a question of whether we want to remain in the Eurozone. That's very clear," he said.

His brinkmanship did not appear to have strengthened his position.

And Papandreou was further weakened when two of his ministers, including Finance Minister Evangelos Venizelos, came out against the referendum, which he had announced on Monday to widespread anger and disbelief in EU capitals.

But he was expected to have a tough message for his hosts. The White House said it wanted "unanimity of purpose" to emerge from the G20, and Beijing too has warned that its support will depend on Europe showing more solidarity.

China's President Hu Jintao dined with Sarkozy late Wednesday, after which officials said they might contribute 100 billion dollars to Europe's bail-out fund, but only if they were convinced the investment was safe.

"Nothing would be worse for China than to contribute to something that ends up failing in several months," he said.

The G20 summit was to formally begin later Thursday and last two days.