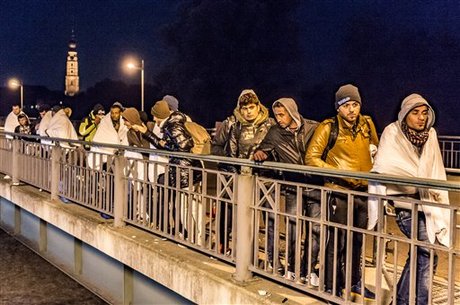 Bavaria's state premier Tuesday blasted Austria for waving on thousands of migrants to Germany without informing local authorities and called on Chancellor Angela Merkel to intervene.

"Austria's behavior is hurting our neighborly relations. We cannot and should not deal with each other this way," Horst Seehofer told the Passauer Neue Presse in an interview.

Seehofer's region, which borders Austria, has been the main gateway for hundreds of thousands of asylum seekers arriving in Germany in recent months.

Bavarian authorities, which have already been struggling to cope with the record numbers, are now also accusing Vienna of failing to inform them when new arrivals are on their way.

They complain that the lack of coordination is leaving them scrambling at the last minute to find resources to welcome the newcomers.

Austrian authorities rejected the claims as "a joke", saying both sides are in constant contact over coordination on the asylum seeker influx.

"Usually we don't comment on political statements but the fact is that if Austria receives 11,000 people in Spielfeld on a daily basis, Bavaria cannot say that it will just process up to 50 people an hour at its border. That's a joke," said police spokesman David Furtner.

"Plus this doesn't meet German standards: the government said that all refugees would be welcome. There seems to be a problem of interpretation by German national police who counteract the directive with restrictions (in migrant numbers)," he added.

Bavaria's police said that late on Monday for instance, around 2,000 refugees crossed on foot into the region, catching local authorities unaware.

Police spokesman Frank Koller said Austria had also informed them that nine buses carrying asylum seekers were on their way to Bavaria Tuesday, but from "unofficial sources, we learnt that there are in actual fact 22 buses on the way".

Bavaria's interior minister Joachim Herrmann also heaped criticism on Austrian authorities, accusing them of only seeking to push the refugees onto Germany as quickly as possible.

"That is irresponsible behavior on the part of our Austrian colleagues," Herrmann told Bayerischer Rundfunk.

The two leaders have in place a "policy of open borders," Seehofer said, adding: "The chancellor can and must end that."

Seehofer, who leads Merkel's conservative allies the CSU, has been among the most vocal politicians in calling into question the German leader's open door policy for those fleeing war and persecution.

Urging an end to the "policy of waving them through", Seehofer warned: "This cannot be only done next year, but must be carried out immediately."

"We will see after All Saints' Day (Sunday) if Berlin is ready to take over Bavaria's request to control and limit immigration," he said.

"If I see no results, then we have to consider what other options we have," he said.