Oil near $91 amid Fears Greece Could Leave Euro 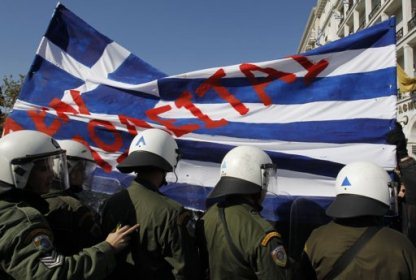 Oil prices fell to near $91 a barrel Thursday in Asia after Germany's leader said a Greek vote in December on a debt bailout package could lead to Greece leaving the euro zone.

Benchmark crude for December delivery was down $1.10 at $91.41 a barrel at late afternoon Singapore time in electronic trading on the New York Mercantile Exchange. The contract rose 32 cents to settle at $92.51 in New York on Wednesday.

Brent crude was down 74 cents at $108.55 a barrel on the ICE Futures Exchange in London.

German Chancellor Angela Merkel said Wednesday that a vote likely to be held on December 4 will essentially be about whether Greece will stay in the European currency union. If Greek voters decide to reject the debt bailout package — which includes fiscal austerity measures to help lower debt levels — Greece could face a chaotic bond default that would undermine European banks.

Merkel made her comments at a news conference with French President Nicolas Sarkozy after the two held emergency talks with Greek Prime Minister George Papandreou in Cannes, France.

Analysts said oil prices could fall during the weeks leading up to the vote as investors mull the possible impact of Greek rejection of the debt plan.

"This move could leave a window of uncertainty during which the financial implications of a "no" vote could be priced into the market," J.P. Morgan said in a report.

However, J.P Morgan expects Brent to average $115 next year amid falling crude inventories and low spare production capacity of suppliers.

"The oil market is very tight and that means it can easily rally by $10 to $20 in a blink on seasonal demand or supply-side issues," the bank said.