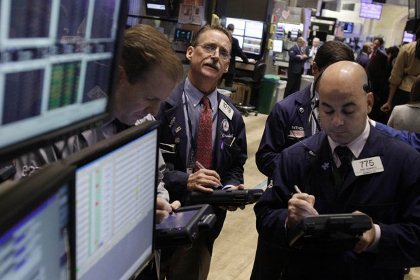 World stocks fell Thursday for the fourth straight day as a European deal to bail Greece out of its financial mess appeared to be on the verge of unraveling.

Wall Street also appeared to be headed lower, with Dow Jones industrial futures slipping 1.1 percent to 11,641. Broader S&P 500 futures fell 1.2 percent to 1,219.60. Oil prices fell to near $91 per barrel, while the dollar rose against the euro but slipped against the yen.

Markets have been gripped by uncertainty since Greece's prime minister unexpectedly announced Monday that he would call a national vote on the European bailout plan that entails painful tax increases and drastic welfare cuts in exchange for massive aid to keep his debt-ridden nation solvent.

European leaders then drew a line in the sand, saying the referendum that is expected in early December will determine whether Greece stays in the 17-nation grouping that uses the euro common currency — and vowing Athens will not get new aid until the result is in.

"The whole thing has become a mess and will certainly keep risk assets shackled in the short term, on the premise that there is a real possibility that Greece may vote against the revised bailout and austerity and subsequently find themselves having to fund their massive deficit," Stan Shamu of IG Markets in Melbourne said in a report.

Should Greek voters reject the austerity plan, it could lead to a messy default on the country's debt that would likely cause massive losses for banks that hold Greek bonds — and possibly spark a wider financial crisis that could send Europe into recession.

Papandreou is scheduled to explain his stance when he meets with leaders of the Group of 20 nations at a summit in France on Thursday and Friday.

The uncertainty about what lies ahead for the European Union — the world's largest economic grouping — as well as the subset of nations that use the euro common currency, hit energy stocks hard.

Hong Kong-listed shares of Lenovo Group, a world leader in personal computer manufacturers, rose 3.2 percent a day after reporting that its profit in the first half of the year nearly doubled on strong emerging market sales.

"While there might be more profit-taking in the next few days, the trend of rising in the long term won't change," said Peng Yunliang, an analyst based in Shanghai.

In the U.S., Wall Street ended higher after an increase in hiring by private companies helped lift stock prices.

Automatic Data Processing said company payrolls rose by 110,000 in October, more than economists had expected. ADP also revised its survey results for September higher. Investors see ADP's report as a precursor to the government's broader employment report, which is due out Friday.

The Federal Reserve said Wednesday the economy was likely to expand modestly over the next two years. But Fed Chairman Ben Bernanke cautioned that the pace of economic growth will likely be "frustratingly slow." The Fed said it would not take any more steps to help the economy for now, but it left open the possibility of more steps later.

Benchmark crude for December delivery was down $1.33 at $91.15 a barrel in electronic trading on the New York Mercantile Exchange. The contract rose 32 cents to settle at $92.51 in New York on Wednesday.