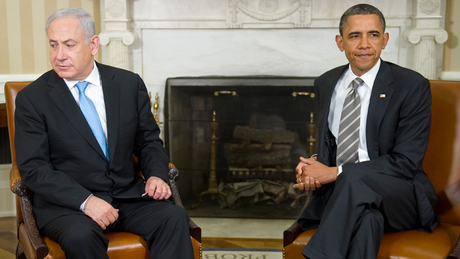 Israeli Prime Minister Benjamin Netanyahu said Sunday he planned to discuss defense aid with President Barack Obama as he left for his first meeting with the U.S. leader in over a year.

Netanyahu is due to meet Obama on Monday in Washington as the two leaders seek to set aside their testy personal relationship and turn the page after a sharp disagreement over the July nuclear deal between Iran and world powers.

The talks are to focus on U.S. defense aid in a bid to assuage Israel over the security challenges it says it now faces due to the nuclear accord, which Netanyahu firmly opposed.

Israel already receives more than $3 billion per year in U.S. military aid in addition to other spending, such as on the Iron Dome missile defense system.

The 10-year arrangement expires in 2017, and there have been reports that Netanyahu will seek a significant increase.

"I believe that this meeting is important in order to clarify the continuation of American aid to Israel in the coming decade," Netanyahu said at the start of a cabinet meeting on Sunday.

"It will be another step toward realizing an understanding in this direction."

The new 10-year defense deal will not be finalized during the Obama-Netanyahu summit, and it would come into effect only after the current accord expires, U.S. officials have said.

The Israeli premier argues that the nuclear accord will not block regional rival Iran's path to atomic weapons.

He also contends that the lifting of sanctions will allow Tehran to further back armed groups in the region, including Israeli enemies Hamas and Hizbullah.

Beyond defense talks, Netanyahu said he planned to discuss with Obama the conflict in Syria and "possible progress with the Palestinians, or at least stabilizing the situation with them."

A wave of violence since the start of October, including gun, knife and car-ramming attacks by Palestinians, have raised fears over the potential for a new Palestinian uprising.

Obama has previously criticized Netanyahu for sending mixed signals over his commitment to a two-state solution and may press him on the issue.

However, American officials say the president has lost any hope of a major peace accord being reached between the Israelis and Palestinians before he leaves office in January 2017.

Netanyahu is expected back in Israel on Thursday.