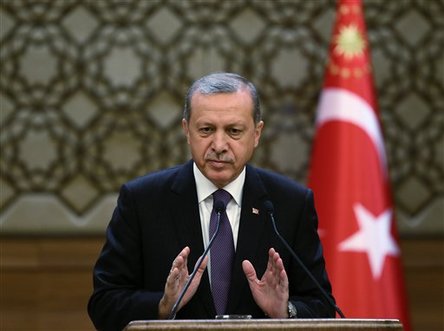 Days before traveling to Turkey for a G20 summit, Obama spoke to Erdogan to "congratulate the Turkish people on the November 1 elections" and discuss the summit, the White House said.

Earlier this month, Erdogan's long-dominant Justice and Development Party (AKP) regained its parliamentary majority in a poll seen as pivotal for the future of the troubled country.

The result was a huge personal victory for 61-year-old Erdogan, Turkey's divisive strongman who may now be able to secure enough support for his controversial ambitions to expand his role into a powerful executive presidency.

He was hailed in the West for creating what was once regarded as a model Muslim democracy, but is now accused of blatantly cracking down on opponents and critical media.

Opponents fear that if he succeeds in expanding his powers, it would mean fewer checks and balances.

Obama has had a sometimes difficult relationship with Erdogan, amid difference of approach to the war in Syria and other key foreign policy issues.

Both have vowed to fight the Islamic State group, but Erdogan's efforts thus far have focused on combating the Kurdish separatist PKK, and, to Obama's chagrin, Kurdish groups fighting IS in Syria.

The White House said both men discussed "the situation in Syria and the importance of expanding joint efforts to strengthen the moderate Syrian opposition and step up pressure against" the self-proclaimed Islamic State.

"They also discussed ways to create conditions for a negotiated solution to the conflict, including a political transition in Syria," the statement added.

Obama called for an end to PKK "terrorist attacks" inside Turkey, it said.