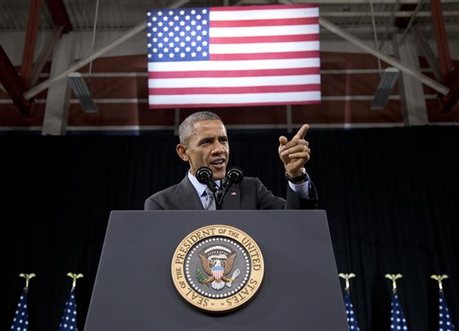 Thrusting the country's top court into the position of arbiter in a charged political row, the Justice Department said it would challenge lower court rulings that blocked Obama's efforts to reform immigration policy.

A year ago, Obama tried to bypass Congress by ordering government agencies to focus on deporting serious criminals, rather than undocumented immigrants who live and work in the United States.

Republicans and Democrats agree that sweeping immigration reform is long overdue, but bitterly disagree about how to do it.

Conservatives -- in the throes of the 2016 election cycle -- reacted furiously, saying the president had effectively granted amnesty to people who broke the law by entering the United States illegally.

They also argued that Obama had gone well beyond his executive powers, prompting governors of 26 U.S. states to take up the case.

A federal court in Texas in February ruled in their favor -- putting the program on hold and prompting a White House appeal, which failed on Monday.

In response to that "adverse ruling," the Department of Justice said it "intends to seek further review from the Supreme Court of the United States."

There are nearly 12 million unauthorized immigrants living in the United States, but only an estimated four million would qualify under Obama's orders.

The White House expressed confidence the Supreme Court would rule in Obama's favor.

But Obama's appeal to the Supreme Court could mean that he is unable to enact the reforms before 2016 elections.

Regardless of whether the Supreme Court takes up the case before then, it is sure to become a major point of contention during the 2016 election campaign.

Democratic presidential frontrunner Hillary Clinton -- who has tried to woo the vast ranks of Hispanic voters -- decried the "politically motivated lawsuit against the President's executive actions."

"I hope the case receives a fair and expeditious hearing before the Supreme Court, so that the millions who are affected can stop living in fear of their families being broken apart," she said.

Republican Chuck Grassley, who chairs the Senate Judiciary Committee, said the ruling showed "the Obama administration does not have unfettered authority to execute whatever it wants.

"The president simply can't singly rewrite the country's immigration laws. This is a win for the checks and balances established by the Constitution," Grassley said.