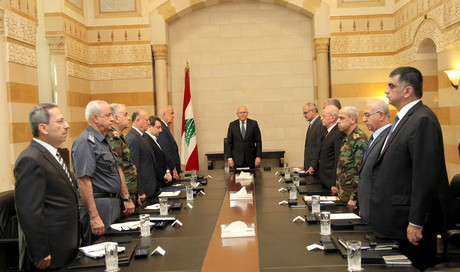 Prime Minister Tammam Salam held an urgent security meeting on Friday over the backdrop of the twin bombings that targeted Bourj al-Barajneh south of Beirut a day earlier, the National News Agency said.

After the meeting Minister Rifi said: “The military public prosecution will take the necessary measures to refer the twin Dahieh bombings to the Judicial Council.”

For his part, Minister al-Mashnouq said: "Political issues will be overcome after the Bourj al-Barajneh attack and this will be evident at the legislative session."

“The security forces are on high alert and cooperation is ongoing between security agencies. We call for a political cover for these forces,” stated Minister Abou Faour.

The security meeting issued a statement afterward saying: “Security measures must be intensified in all Lebanese regions and the highest levels of vigilance must be maintained.

“Terrorism has never ceased planning to inflict harm and trigger strife in Lebanon,” the statement added.

State Commissioner to the Military Court Judge Saqr Saqr visited the site of the blast, he said: “Two suicide bombers were behind the attack and claims of a third one are inaccurate. The bomb weighed 7kgs and the second weighed 2kgs.”

At least 43 people were killed in a twin bombing claimed by the Islamic State group, the bloodiest such attack in years.

The Red Cross said at least 239 people were also wounded, several in critical condition, in the blasts that hit a busy shopping street in the Bourj al-Barajneh neighborhood, a stronghold of Hizbullah party.

The army said the attack was carried out by two suicide bombers, and that the body of a third who failed to detonate his explosive device was found at the scene of the second blast.

The Islamic State group claimed responsibility for the bombing, saying that three suicide bombers were behind the attack.

It identified them as Syrian Khaled al-Khaled and Palestinians Hamed al-Balegh and Ammar Salem al-Rayyes, the Voice of Lebanon radio (100.5) said.

leave it to abbas ibrahim, and he will find a few people to confess.

Ha ha a meeting for what, they can't even sort out the trash!

well said! they can quickly agree when it comes to money, but cannot on issues that concerns directly lebanese welfare and every day life!

what a meeting... They agree for the security forces to take action! Bravo Lebanese cabinet that can't even agree to collect the trash that is flooding the streets of Beirut! How can they defend the Lebanese public if they can not even collect trash? Why not agree to extend their terms for another 2 years, because this attack proves there cant be elections. Instead an extra 2 - 5 years of the same politicians will ensure the same loser, thieves will continue to rape our country even more on top of the fresh graves of the newly innocent dead.... Another 5 years extension is best!

if ever there is a need for a military coup in Lebanon, then this is it!! Someone from the Watan save us from this sad excuse for a government!

i am a hero now thanks to sayyed hassan

why all this uproar and over what? What happened yesterday in the slumps of dahieh is a daily occurrence in Syria where Hizballah and its allies bomb crowded markets with all kinds of weapons and kill civilians. I don't see why people are up in arms and sad, strange!