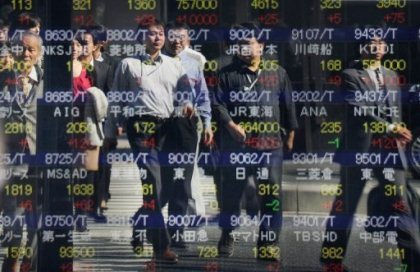 Investor confidence was also boosted by a surprise rate cut by the European Central Bank.

"While the (Greek) show remains far from over, markets nonetheless breathed a huge sigh of relief on the news," the referendum may not go ahead, DBS Group said in a note, according to Dow Jones Newswires.

George Papandreou said a referendum would not have to be held if the Greek opposition backed the rescue package hammered out by European leaders last Thursday. The opposition has already given its support to the deal.

The Greek leader has been under pressure to get his house in order from his colleagues at a G20 summit meeting in Cannes, France, this week.

Papandreou, who faces a confidence vote in parliament on Friday, told members of his socialist PASOK party that Greece had to implement the terms of the rescue package or face a humiliating exit from the 17-nation eurozone.

"Rejecting the plan via a 'No' vote in a referendum, holding early elections, or not getting a (parliamentary) majority in favor of the package would mean leaving the euro," he said.

While he stopped short of formally announcing the referendum was scrapped, Finance Minister Evangelos Venizelos was more forthright.

He said: "From what we have understood from the speech of the prime minister, the government and therefore the country, is officially announcing that it is not heading towards organizing a referendum."

Global markets rallied last week after the eurozone unveiled a deal to tackle the region's debt crisis that would see Greece's bondholders take a loss on their investments, banks recapitalize and a bailout fund boosted.

It also provided a fresh rescue package for Greece as long as it agreed to more austerity measures.

However, Papandreou shocked the world Monday by saying he would put the bailout deal to a referendum, raising the prospect it would be rejected by a nation already fed up with swinging cuts.

Adding to Friday's buying sentiment was the European Central Bank's decision earlier to cut interest rates a quarter of a point to 1.25 percent, a shock move by the bank's new chief Mario Draghi.

While the cut initially sent the euro lower the common currency soon rebounded, helped by the news from Greece.

On Wall Street the Dow rose 1.76 percent, the Nasdaq gained 2.20 percent and the S&P 500 was 1.88 percent higher thanks to strong earnings figures from foods giant Kraft and cellphone chip maker Qualcomm.

Dealers will be looking to Washington later in the day as the government releases the latest non-farm payrolls data for a hint at the state of the U.S. economy.