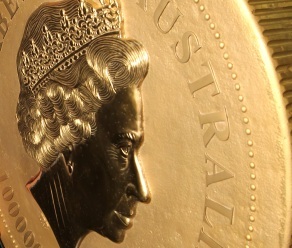 A large gold coin which had displaced an Australian coin as the world's biggest, but recently lost the title, was on display this week in Canada's largest city.

The coin, measuring 50 centimeters across, took over two years to make from design to final product. When it was introduced in 2007 by the Royal Canadian Mint, it set a Guinness World Record.

But the Perth Mint reclaimed the record for the world's biggest bullion coin last week when it unveiled a 1,000-kilogram coin. It previously held the title with a 10kg coin until 2007, when the Canadian mint launched its 100kg coin.

Although it is now only the second biggest gold coin in the world, the Royal Canadian Mint's huge gold coin is still the purest, according to the mint, and it has traveled the world.

"It's been to the Middle East, it's been to China, it's been to Europe," said Royal Canadian Mint spokesperson Alex Reeves, noting that the coin has a face value of $1 million and the gold is 99.999% pure.

One side of the coin features a maple leaf design, while the head of Queen Elizabeth II is on the other side.