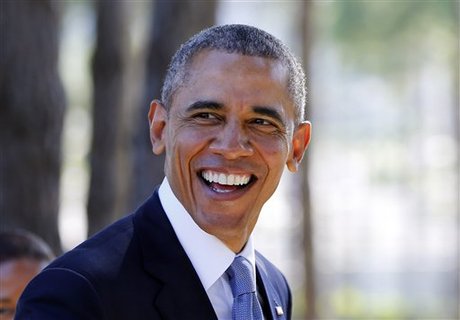 U.S. President Barack Obama arrives in the Philippines Tuesday with his much-vaunted "pivot to Asia" again overshadowed by events in Europe, the Middle East and politics at home.

Obama will touch down in Manila with the world's focus on the murderous attacks in Paris claimed by the Islamic State group and soul searching about how to counter it in Syria and Iraq.

The long-planned Asia trip had been designed to underscore America's role as a "Pacific power" and timed to coincide with high-profile regional summits, which Obama has made a point of attending.

"When we're not at the table, we're on the menu," said senior foreign policy aide Ben Rhodes half-jokingly, explaining the administration's policy.

Before the Paris attacks, National Security Advisor Susan Rice previewed Obama's trip as an opportunity to herald a vast trans-Pacific trade deal and efforts to promote a "rules-based order" amid tensions in the South China Sea.

But Obama has spent the last few days talking about Syria, Iraq and the Islamic State, and will likely do so again with Asian leaders.

That focus may actually sit well with some Asian nations, according to Ernest Bower of Washington think-tank CSIS.

"Countries such as Indonesia, Malaysia, Singapore and Brunei - have real and immediate concerns about citizens who have left to fight in Syria and Iraq and will be returning," said Bower.

"After Paris, most Asian countries will be looking to the US for leadership in the counter-ISIS (Islamic State) fight. This will underline the US global security role."

For his part, Obama may point to majority Muslim nations in Southeast Asia as examples of how economic development can put a lid on radicalism.

Still, another sidetracked trip to the region is a far cry from early in Obama's term when the Hawaii-born commander-in-chief confidently declared himself "America's first Pacific president".

Throughout his administration, key aides have been frustrated at events in Iraq, Syria, and elsewhere perennially dominating presidential agendas and security briefings.

In their view, populous and fast-growing Asia has, as a result, not always received the attention it deserves.

But events in Europe and the Middle East are not the only things holding Obama back as he arrives in Manila.

The White House faces an uphill battle to pass the Trans-Pacific Partnership free-trade deal -- which would spur trade between 12 Pacific rim nations representing 40 percent of the world's economy -- through Congress.

Sources on Capitol Hill say the agreement may not be ratified until after U.S. elections in November, 2016, or until a new president has taken office in early 2017.

Top Democrats, including Obama's would-be successor, Hillary Clinton, have opposed the deal, while Republicans are loathe to give Obama a major policy victory.

The White House is pressing its case hard, insisting there is no reason to make U.S. business wait to reap the benefits of the deal.

Before leaving for Asia, Obama assembled some of the most prominent foreign policy thinkers from past Democratic and Republican administrations to sell the geo-political case for the agreement.

The deal is seen by some as a counterbalance to growing Chinese economic clout in the region. Beijing is not a member.

"Economically, the Asia-Pacific region is the most dynamic, the most populous and fastest-growing region of the world," Obama said flanked by luminaries Madeleine Albright, James Baker, Henry Kissinger and Colin Powell.

"And strategically, it is a region that's absolutely vital to our economic and national security interests in the 21st century."

Congress has also thwarted White House efforts to ratify the United Nations Convention on the Law of the Sea (UNCLOS), which experts say could strengthen Washington's case that Asian nations must solve maritime disputes by legal means.

The accord provides the ground rules for maritime claims and passage, just as China is moving to assert greater control in the hotly contested South China Sea.

The Philippines has filed a case against China's claims to nearly all of the South China Sea, using UNCLOS as its legal foundation.

"The president strongly supports ratification," a senior administration official told AFP, referring to the agreement that has been signed, but not yet ratified by the U.S. Senate.

Bill Bishop, author of the Asia-focused Sinocism newsletter, said the United States not ratifying UNCLOS hurt its credibility on the issue.

Bishop said the United States was currently only using a "blunt instrument" of military posturing, pointing to a U.S. missile destroyer recently sailing close to Chinese-made artificial islands in the sea.

"It would be much better for the entire region if the US had a portfolio of options that were both hard and soft," Bishop said.