Protests Erupt in and Outside Kosovo's Parliament 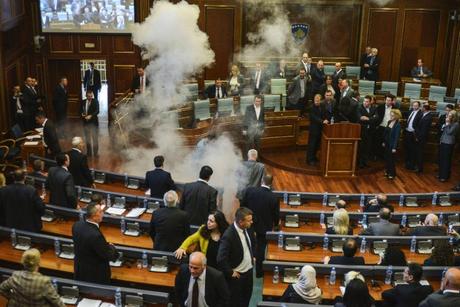 Kosovo's opposition fired tear gas and pepper spray in parliament Tuesday while protesters outside threw stones and paint, in the latest eruption of a long-running protest against agreements made with Serbia.

Opposition MPs have been paralyzing parliamentary sessions for weeks in a bid to thwart EU-brokered dialogue and agreements with Serbia, the country from which Kosovo broke away and declared independence in 2008.

Despite a heavy police presence in and around the parliament, tear gas was released on Tuesday for the fourth time in the chamber, while prominent opposition MP Albin Kurti fired pepper spray, said an Agence France Presse reporter at the scene.

Kurti, from the Self-Determination party and a leading figure in the ongoing protests, sprayed in the direction of ministers but was blocked by two rows of police.

Outside parliament, meanwhile, clashes broke out between around 100 protesters and anti-riot police, who fired tear gas in retaliation to hurled bottles, stones and paint, an AFP photographer said.

Police said Molotov cocktails were used by protesters in the scuffles which injured six officers and one protester, while two demonstrators were arrested.

The disruption inside parliament forced MPs from the governing coalition to reconvene in another room to finish the session on next year's budget but without the presence of opposition deputies.

"This is a criminal act of individuals against whom measures should be taken. They should be held accountable before the law," Prime Minister Isa Mustafa told the reconvened MPs.

"We will not allow a minority of 30 deputies to obstruct the work of the parliamentary majority."

The tensions came as King Abdullah II of Jordan was due to make an official visit to Kosovo on Tuesday.

- 'Requests clear' -The protesters are especially opposed to plans to set up an association of Serb-run municipalities giving greater autonomy to Kosovo's Serb minority, saying the initiative will deepen the ethnic divide and increase Serbia's influence in Kosovo.

The agreement was reached during EU-brokered talks with Serbia, which aim to improve relations between the two sides that were at war in 1998-1999.

Belgrade refuses to recognize the independence of Kosovo, whose population is predominantly ethnic Albanian.

The opposition also rejects a border agreement made with neighboring Montenegro in August, which it says led to a loss of territory.

"Our requests are clear. We have been opposing the parliament for almost two months now, and we will continue until they are fulfilled," said Visar Ymeri, leader of the Self-Determination party.

Earlier this month, Kosovo's constitutional court suspended the implementation of the controversial association of Serb-run municipalities, pending the court's review, following failed attempts by parliamentary leaders to reach a compromise on the issue.

The move came a day after the UN cultural body UNESCO rejected Kosovo as a member, in a vote hailed as a victory by Belgrade.