Trudeau Tells Obama Canada Will Be 'Strong' Partner against IS 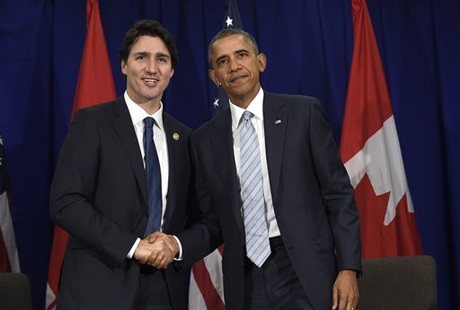 The two men joked about greying hair and traded compliments about their spouses and kids, even as Trudeau said he would not reconsider a decision to pull Canadian jets out of Iraq and Syria.

"I made a clear commitment to Canadians to withdraw the six fighter jets," Trudeau said.

Obama's administration has tried to bind allies into a coalition fighting Islamic State and lessen the burden on the U.S. military.

Hoping to ease the impact of Canada's withdrawal, Trudeau said he would help the counter-IS mission in other ways.

"Canada will and must remain a strong member of the coalition," Trudeau said on the sidelines of a trade summit in Manila.

Trudeau said he will ramp up Canada's commitment to training forces fighting the violent Islamist group.

Canada last year deployed 69 military trainers to northern Iraq to train Kurdish militia, as well as six CF-18 fighter jets that have conducted 1,121 sorties in Iraq and Syria as of November 15.

"There is much that Canada can do and Canada will continue to work with our coalition partners to ensure that we're doing what we can, including militarily, to degrade and defeat ISIL over the long haul," he said using an acronym for Islamic State.

In later comments to the press, Trudeau said Canada would likely need to be making decisions on how to respond to the violent group for "months, and yes, probably years".

Smoothing over that potential pitfall, Obama, who is soon to leave office, and Trudeau, a youthful neophyte, traded thoughts on life in politics.

"I'm confident that he's going to be able to provide a great boost of energy and transform the Canadian political landscape," Obama said, inviting Trudeau to visit Washington.

"The first call I made to him, I said, 'Justin, congratulations. You and your family look great. I know Canadians are incredibly inspired by your message of hope and change,'" Obama said, echoing the messages of his own 2008 election campaign.

"I just want to point out that I had no grey hair when I was in your shoes seven years ago. So if you don't want to grey like me you have to start dying it soon. Because it's too late," added Obama, who will leave the White House in January 2017.

Trudeau joked that grey hair was beyond his control and said he looked forward to the trip to Washington.

"My wife Sophie is going to be very excited to hear about Michelle's garden, because she has started a vegetable garden as well in our backyard," he said referring to the U.S. first lady.

"But what Barack pointed out to me about how fast his daughters grew in the seven years since that first night of his electoral victory really struck home to me," Trudeau said.

"I am making sure to try and remain as attentive and present for my kids, not just because it makes me a better parent and a better person, but also because it's what keeps us focused as leaders on what actually matters."

Trudeau's good looks have set many Filipino hearts aflutter with him and Mexican President Enrique Pena Nieto being dubbed "APEC Hotties" both on social media and in the local press.

Asked by a local reporter how he feels about receiving that kind of attention, Trudeau, the son of a former prime minister, said he has had to deal with being in the limelight in the past.

"One of the things about growing up somewhat in the public eye is that I had to develop a capacity to separate people's perceptions of me from who I really am."