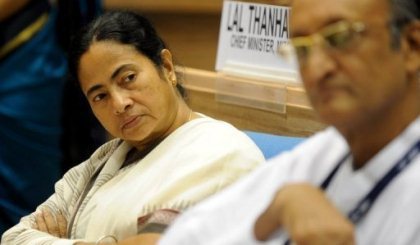 India's prime minister returned from abroad on Saturday to face a political revolt over a petrol price increase with a key coalition ally threatening to withdraw support unless the hike is reversed.

The regional Trinamool Congress, the second-largest party in the coalition with 19 lawmakers, said it may quit the ruling alliance unless Prime Minister Manmohan Singh rolls back the price rise.

"Our withdrawal of support may result in fall of the government," Trinamool chief Mamata Banerjee said late on Friday, but added "we will not accept this burden on the poor."

Banerjee, however, said she would wait until she met with the prime minister, who had been in Cannes, France, for the two-day Group of 20 meeting of emerging and wealthy nations before taking any decision.

Banerjee, who is also chief minister of the Trinamool government in the state of West Bengal, made the statements after she held an emergency meeting with the parliamentary wing of the party.

"If it goes on like this we don't want to stay in the government," she said.

It was not immediately known when the political leaders might meet.

The state-run oil firms raised petrol prices on Friday in order to offset losses on sales due to an 11 percent drop in the rupee against the dollar since April and high crude oil prices.

The southern DMK, the third-largest party in the national coalition with 18 members, also demanded a rollback of the price increase, saying it had added "enormously to the burden of the poor, lower and middle classes."

Singh, however, defended the price hike in a televised statement in Cannes, saying that India "must move in the direction of decontrolling more prices. I have no hesitation in saying that markets must find their own levels."

The latest row comes as Singh's government is already reeling from a series of corruption scandals including the flawed sale of telecom licenses that cost the country up to $39 billion.

Hey is this serious?