Germany to Send 650 Troops to Mali to Relieve France 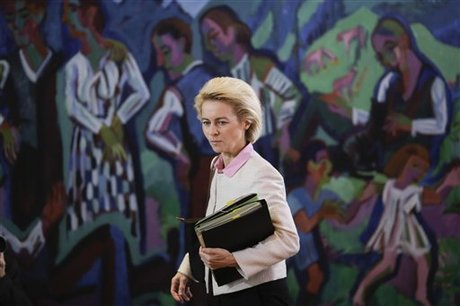 Germany will send up to 650 soldiers to Mali, Defense Minister Ursula von der Leyen said Wednesday, to provide some relief to France in its global fight against the Islamic State jihadists.

Von der Leyen made the announcement hours before German Chancellor Angela Merkel travels to Paris to meet President Francois Hollande to discuss support in the wake of the deadly November 13 attacks by the Islamic State group in the French capital.

"We will and must stand firmly by France's side and do everything we can to help in this situation," von der Leyen said after a parliamentary defense committee meeting.

"We will make a substantial contribution to this mandate. That is why we will soon put a mandate for 650 troops before (the German) parliament."

She said the German soldiers would focus on logistics and reconnaissance as part of the U.N. peacekeeping mission in Mali (MINUSMA).

Berlin had previously deployed around 10 soldiers as part of the U.N. mission and von der Leyen had in October already discussed increasing the number of troops.

"The French are very pleased that we are boosting our engagement here," she said.

Von der Leyen added that if the international mission manages to create more stability in Mali, "the French will no longer be so tightly bound to this part of the world".

Around 1,500 French troops are deployed in Mali as part of the fight against Al-Qaida-linked jihadist groups which seized control of the country's north in 2012.

Large parts of Mali remain beyond the control of government and foreign forces, despite the French-led mission launched in 2013.

The EU also has a military training mission in Mali (EUTM) in the relatively quiet south of the country, to which Germany has contributed 200 soldiers.

Merkel said earlier in a speech to parliament that Germany would "stand in solidarity at France's side".

"If further commitments prove necessary, we wouldn't rule it out," she said.