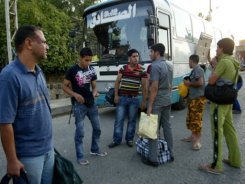 More than one million people have visited the autonomous Kurdistan region in north Iraq -- a haven of relative stability -- in the past nine months, a tourism official said on Saturday.

"The number of tourists who visited Kurdistan during the last nine months reached 1.15 million tourists," Mawlawi Jabbar, the head of the General Committee for Tourism in the Kurdistan tourism and municipalities ministry, told Agence France Presse.

This compares to 900,000 tourists during the same period last year, he said.

"These tourists are coming from other Iraqi areas, the center and the south," he said, and also include "foreign tourist groups that have started to arrive in the region."

More tourists are expected for the Eid al-Adha, or Feast of Sacrifice, which begins in Iraq on Sunday, Jabbar said, estimating that tourism for the year will reach 1.5 million.

While the rest of Iraq remains plagued by violence, the three-province Kurdistan region is relatively stable.

However, Kurdish rebels fighting Turkey and Iran have bases in the region. Both of those countries have carried out recent bombing campaigns against the rebels, and Turkey launched a ground incursion into Kurdistan last month.