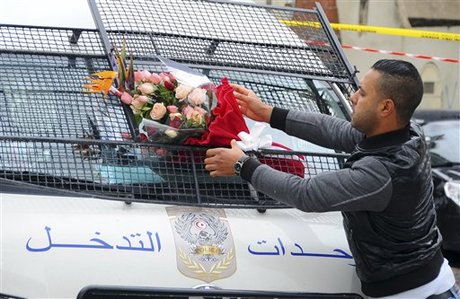 Tunisia's leaders faced calls Thursday to rethink their strategy in the fight against extremism following a suicide bombing by the Islamic State jihadist group of a busload of presidential guards.

The North African nation's struggle against Islamist violence has taken on added urgency following three major attacks this year by IS, which has made Tunisia one of its main targets.

The authorities closed the border with strife-wracked Libya for 15 days, imposed a nationwide state of emergency and a night-time curfew in Tunis after 12 presidential guards were killed in Tuesday's blast.

"Some of the materials used in the bombing are not available in Tunisia, but they can be found in Libya," Prime Minister Habib Essid said in parliament.

On Thursday, the interior ministry identified the suicide bomber, based on "final biological analysis", as Hussam ben Hedi ben Miled Abdelli, a 26-year-old traveling salesman from Manouba near the capital.

The bombing comes after 60 people were killed, all but one of them foreign tourists, in two separate IS attacks earlier this year in the Mediterranean resort of Sousse and at the National Bardo Museum in Tunis.

The response has been criticized by some politicians as insufficient.

Several other politicians, including Abdellatif Mekki of the Islamist party Ennahda, the country's number two political force, called for a national congress on the fight against terrorism.

The National Security Council on Wednesday decided to increase surveillance of maritime borders and in airports, recruit 6,000 more personnel for the army and interior ministry, and step up efforts to block Internet sites linked to extremism.

It also pledged to implement a terrorism law -- which was met with skepticism by many Tunisians when it was adopted in July --- as quickly as possible.

Independent expert Selim Kharrat criticized the response as "superficial decisions taken to reassure a frightened public, which indicates a lack of vision".

"What is the basic strategy? What about the reform of the security apparatus? What do you plan to do for education and to tackle unemployment?" he asked.

Essid told parliament that a youth employment plan in regions plagued by extremism and poverty would be implemented "from next week".

Tunisia, the cradle of the Arab Spring uprisings, has been plagued by Islamist violence since the 2011 overthrow of longtime dictator Zine El Abidine Ben Ali.

Thousands of Tunisians have traveled to Libya, Iraq and Syria to fight alongside Islamic extremists, according to the authorities, who say the Sousse and Bardo attackers received arms training in Libya.

Tunis Cathedral was due to hold a mass for peace Thursday in memory of the victims of extremism in Tunisia and worldwide.

Rights groups have urged Tunisia to respect civil liberties during the state of emergency and curfew, which the authorities have voted to apply "strictly".

"Now more than ever, Tunisian authorities have a responsibility to stay committed to a rights-respecting society and democratic principles," New York-based Human Rights Watch said.