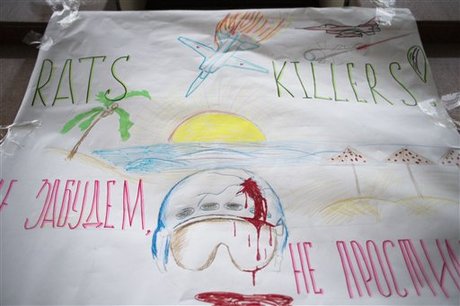 Turkey's downing of a Russian war plane on the Syrian border risks inflicting significant damage on relations between Moscow and Ankara, even if they both have an interest in avoiding a permanent rupture.

Modern Turkey and Russia are the successor states of empires that fought over three centuries of war from the late 16th century for the Black Sea and Caucasus but in recent years forged a sometimes uneasy but pragmatic alliance.

Energy-poor Turkey relies on Russia for over half of its natural gas imports while Moscow has also started building Turkey's first nuclear power station at Akkuyu in the south of the country.

President Vladimir Putin's first retaliatory move after Tuesday's incident was to hit Turkey where it hurts -- by warning Russians not to visit the country and instantly dealing a blow to its key tourist sector.

According to official data, in 2014 just under 4.5 million Russians visited Turkey, the most arrivals from any country other than Germany.

Russia's federal tourism agency has warned all Russian operators to stop selling tours to Turkey, an order that appears to have been immediately followed by companies.

As well as pressuring the tourism sector, Russian can hurt Turkey by decreasing Turkish agricultural imports and pressuring Turkish companies with investments in Russia, said Ozgur Unluhisarcikli, Ankara office director of the German Marshall Fund of the United States.

Russia could even upgrade support for Kurdish rebels in Syria accused by Turkey of being an offshoot of the outlawed Kurdistan Workers' Party (PKK) and allow them to open an office in Moscow, Unluhisarcikli told AFP.

But he added: "While Russia will not let this incident go unanswered, it will avoid any open aggression towards Turkey who is a NATO member.

"It is also unlikely that Russia will punish Turkey by cutting its gas," he said, noting this would lead to questions about the reliability of Russian supply contracts.

"We assume Russian reprisals... will not lead to further Turkish escalation and in due course the Turkish-Russian relationship will return to a degree of geopolitical equilibrium," said Michael Harris, global head of research at private Russian investment bank Renaissance Capital.

Similarities are often noted between Putin and his Turkish counterpart Recep Tayyip Erdogan -- two men both in their early sixties, in power for over a decade and criticized for pursuing imperial goals for post-imperial societies.

For a while it seemed that the tough-talking pair had notched up a macho “bromance”.

But Putin has been infuriated by the border incident, explicitly accusing Turkey of links to Islamic State (IS) jihadists.

"We are observing what the whole world is seeing -- that today's Turkish leadership has for many years been persuing a focused policy to support the Islamisation of the country," he said.

Prime Minister Dmitry Medvedev went even further, alluding to "direct financial interests" on the part of some Turkish officials to petrochemical exports from IS-controlled Syria.

"The golden period between Turkish-Russian relations is clearly over," Pinar Elman, Turkey analyst at the Polish Institute of International Affairs, told AFP.

Relations between Russia and mainly Muslim Turkey have never been easy. Even after the collapse of the Ottoman Empire they were foes on opposing sides in the Cold War following Turkey's entry into NATO in 1952.

"We can expect a possible escalation of tensions with Russia like during under Ottoman rule," wrote Turkish commentator Cengiz Candar for the Radikal online daily, warning Turkey also faced a Russia-Iran alliance.

But a shared suspicion of the West brought them closer in recent years, with joint projects notably including the Turk Stream pipeline underneath the Black Sea and a goal of $100 billion in two-way trade by 2023.

Russia's annexation in 2014 of Crimea, which was bitterly opposed by the Turkic-speaking Tatar minority on the peninsula, did not bruise ties.

And commercial ties managed to survive the deep dispute over the future of Russia's ally and Turkey's archfoe Syrian President Bashar Assad.

But analysts said this "compartmentalization" of relations may now be over, given the ferocity of Putin's attack on Turkey's domestic policies.

"Until now they have not been commenting on each others' domestic politics and have kept the economic dimension separate," said Elman.