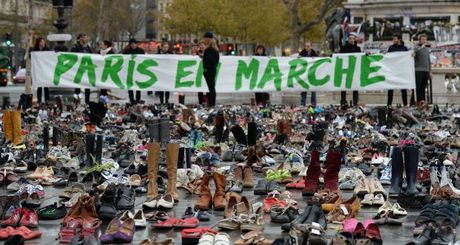 Protesters linked hands near the violent heart of the Paris terror attacks Sunday, giving an emotional jolt to world leaders flying into the French capital to try to save Earth from a climate catastrophe.

As hundreds of thousands of people joined worldwide protests, the human chain aimed to send a highly symbolic message to leaders on the eve of the official opening of a 195-nation UN climate summit in Paris.

French authorities cancelled two climate demonstrations following the onslaught by gunmen and suicide bombers which killed 130 people across the city on November 13.

Instead of marching, activists left thousands of pairs of shoes -- weighing more than four tonnes according to organisers -- on the ground at the Place de la Republique square. One pair of running shoes was left by UN Secretary General Ban Ki-Moon.

In the first organised demonstration in the French capital since the attacks, climate protesters of all ages lined the wind-blown streets to link up in a two-kilometre (1.2-mile) human chain instead of holding a march.

"I hope this time the conference will lead to something solid," said Denis Diderot, a retired university teacher who joined the demonstration wearing a beret and a prestigious French medal, the Legion d'Honneur.

Protesters left a 100-metre (300-foot) gap in the chain in front of the flowers left outside the Bataclan concert hall, where the worst violence claimed 90 lives, as a mark of respect to the victims.

About 2,800 police and soldiers will secure the conference site, and 6,300 others will deploy in Paris, with French Interior Minister Bernard Cazeneuve saying nearly 1,000 people thought to pose security risks had been denied entry into France.

"The earth's temperature shouldn't rise any further and this is everyone's concern and responsibility," Modi said in his monthly radio address.

Rallies demanding curbs to carbon pollution have been growing around the world since Friday, with marches involving tens of thousands across Australia Sunday kickstarting a final day of people-powered protest.

- 'Mum, did you know?' -"In 10 years' time our children are going to say, 'Mum, did you know about this? What was everyone doing'?" said Kate Charlesworth, a doctor and mother in Sydney, where 45,000 people converged.

In a sign of the urgency of the talks ahead, the start of the climate negotiations themselves, conducted by bureaucrats, have been brought forward to Sunday on the eve of the official opening.

In the past week, the UN's weather body said the average global temperature for the year 2015 is set to rise one degree Celsius above pre-industrial levels, halfway towards the top end of the Paris conference's attempted limit.

Voluntary carbon-curbing pledges submitted by nations to bolster the Paris pact, even if fully adhered to, put Earth on track for warming of 2.7-3.5 degrees C, according to UN climate chief Christian Figueres.

French President Francois Hollande, host of the November 30-December 11 talks, has warned of obstacles ahead for the 195 nations seeking new limits on heat-trapping gas emissions from 2020.

Potential stumbling blocks in Paris abound, ranging from financing for climate-vulnerable countries to scrutiny of commitments to curb greenhouse gases and even the legal status of the accord.

The last attempt to forge a global deal -- the ill-tempered 2009 Copenhagen summit -- foundered upon divisions between rich and poor countries.