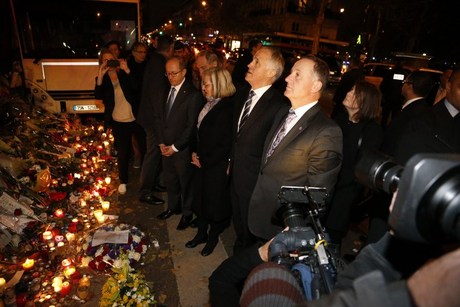 Climate negotiators in Paris vowed Sunday to craft an historic pact to avert catastrophic global warming in honor of the victims of this month's horror attacks in the French capital.

The undertaking was made as negotiators met ahead of Monday's formal opening of a two-week conference tasked with forging a pact unifying long-bickering nations in the struggle to end the world's dependence on climate-altering fossil fuels.

The summit opens two weeks after the November 13 gun and suicide bomb attacks in Paris claimed by the Islamic State group, in which 130 people died.

"The best way to honor the memory of those who have fallen, those who are victims of barbaric attacks, is to carry out what we have committed to," one of two chairmen of the talks, Ahmed Djoghlaf, told participants as he launched the negotiations.

French Foreign Minister Laurent Fabius appealed to all 195 nations involved in the talks to act with urgency and be willing to compromise, seeking to end two decades of rivalry that has stymied previous efforts to forge a climate rescue pact.

"We have to decide how we will be living together on this planet," Fabius told the diplomats.

He urged them to "find compromises on all topics to reflect the challenges we face."

Rich and poor nations have long tussled over who should accept responsibility for climate change, and who should shoulder the burden for curbing emissions going forward.

The dispute is again expected to be a stumbling block in Paris.

The goal of the talks is to limit global warming to two degrees Celsius (3.6 degrees Fahrenheit) over pre-Industrial Revolution levels.

To do this, the world will have to radically shift away from fossil fuel emissions blamed for climate change and embrace renewable technologies.