Extreme Weather Tied to Over 600,000 Deaths Over 2 Decades 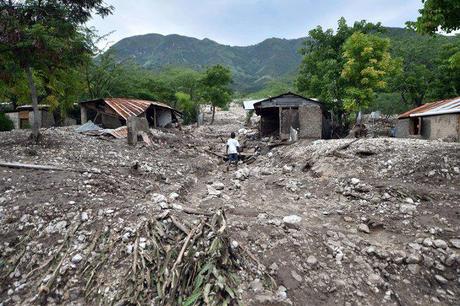 Weather-related disasters in the past two decades have killed more than 600,000 people and inflicted economic losses estimated at trillions of dollars, the United Nations said on Monday, warning that the frequency and impact of such events was set to rise.

The figures were released before a United Nations-backed climate meeting, starting next Monday in Paris, at which more than 120 national leaders will try to rein in greenhouse gas emissions and slow the rise in global temperatures.

According to the report from the United Nations Office for Disaster Risk Reduction, the United States has had the highest number of weather-related disasters in the past two decades, but China and India have been the most severely affected, enduring floods that had an effect on billions of people.

As well as killing hundreds of thousands, weather-related disasters affected 4.1 billion other people left wounded, displaced or in need of emergency assistance and inflicted economic costs well in excess of $1.9 trillion over the two decades, the report found.

The United Nations office recorded an average of 335 weather-related disasters every year over the two decades, double the level in the previous 10 years. The report counted events that had killed 10 or more people, affected more than 1,000 and generated appeals for external assistance.

In a foreword to the findings, Margareta Wahlstrom, the head of the disaster reduction office, said the findings “underline why it is so important that a new climate change agreement emerges” from the summit meeting in Paris.

Citing the rising temperature of the oceans and melting glaciers as two central drivers of extreme weather, Ms. Wahlstrom said that agreement on reducing greenhouse gas emissions would help reduce the huge damage and losses inflicted by disasters linked to climate.

There is strong evidence that the warming climate is creating more frequent and intense heat waves, causing heavier rainstorms, worsening coastal flooding and intensifying some droughts, but for many other types of weather occurrences, the linkage is less clear.

Floods accounted for close to half of all the weather-related disasters, affecting 2.3 billion people, mostly in Asia, the report found. Storms took the heaviest toll of lives, however, causing about 242,000 recorded deaths, including 138,000 killed by Cyclone Nargis, which struck Myanmar in 2008.

Droughts, most acute in Africa, affected more than a billion people in the past two decades, leading not only to hunger, malnutrition and disease but also to widespread agricultural failure that resulted in long-lasting underdevelopment, the report said.

Heat waves killed 148,000, mostly in Europe, and wildfires emerged as another climate-related risk, according to the report. About 38 major wildfires in the United States were estimated to have affected more than 108,000 people and caused recorded losses of over $11 billion — numbers the report said were sure to rise when fires that were raging after August 2015, the cutoff point for data, were taken into account.

The figure of $1.9 trillion for the worldwide cost of the disasters was drawn up for the United Nations by the Center for Research on the Epidemiology of Disasters, based in Belgium. The center said that figure was a minimum, however, as data was available for only a little more than a third of the recorded disasters.

An earlier version of this article referred imprecisely to the 4.1 billion people who have been affected by weather-related disasters in the past two decades. Those people were wounded, displaced or left in need of emergency assistance, not all wounded.