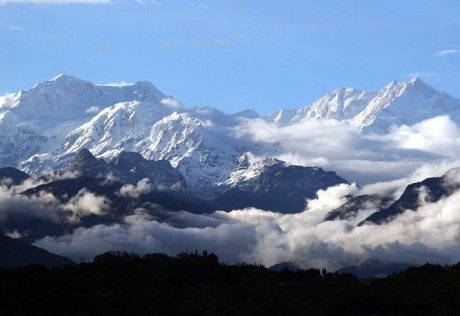 An ancient ritual worshipping Kanchenjunga, the world's third-highest mountain, has ended with the death of the last Lepcha priest in remote northeast India, reports said Sunday.

The indigenous Lepcha people of Sikkim paid homage to the Himalayan peak for hundreds of years in an annual ceremony led by direct descendants of the original "bongthing" or priest.

But the death of Samdup Taso, 83, has left the Lepchas without a spiritual leader to offer prayers to the mountain, which is revered as Sikkim's guardian deity, the Times of India reported.

"The tradition... has ended forever. It is not possible for another person to learn the rituals and take Samdup Taso's place," local resident Sherap Lepcha told the paper.

Taso, whose son has not become a priest, died in his native Nung village in the Dzongu region of north Sikkim on October 31 without anointing a successor.

The Lepchas are seen as the original inhabitants of Sikkim, a tiny former kingdom nestled between Nepal, Tibet and Bhutan that only became part of India in 1975.

"Taso, believed to be a descendant of the first 'bongthing', used to lead (the) elaborate rituals that would commence with overnight prayers at his residence," the Times reported.

"The next morning, the 'bongthing' would lead a large procession towards... an open air altar at Nung -- the first Lepcha settlement -- while singing songs that trace the history of the Lepchas."

Details of the Lepcha creation myth vary, but the Calcutta Telegraph in its report on Taso's death said locals believed that the first Lepcha couple had been made from fresh snow at Kanchenjunga's summit.

The British climbers who conquered Kanchenjunga in 1955 stopped just short of the peak out of respect for Sikkimese culture, and other expeditions have since followed suit.

The mountain, measuring 8,586 meters (28,169 feet), straddles Sikkim's western border with Nepal, and tourists from around the world travel to the region to admire its distant peaks.

Sikkim was controlled by "chogyals" (kings) until 1975, when India intervened after an uprising against the monarchy by the majority-Nepali population who migrated into the region in the 19th century.

The Times reported that about 55,000 Lepcha people remain in Sikkim, 800 years after they settled near the base of Kanchenjunga.

Taso had witnessed a sharp decline in ceremonies devoted to Kanchenjunga in recent decades as many Lepchas turned from nature-worship to Buddhism or Christianity.

"He was the last one in an ancient lineage of shamans who could perform the royal Kongchen (mountain deity) ritual," Jenny Bentley, a Zurich-based ethnographer specializing in the Lepcha, wrote in the Sikkim Express on Sunday.

"With his death a large part of the oral tradition and memory is lost irrevocably."

Reports said that Taso died after mild earthquake tremors shook the region. Sikkim was hit by a severe quake in September that killed at least 100 people.