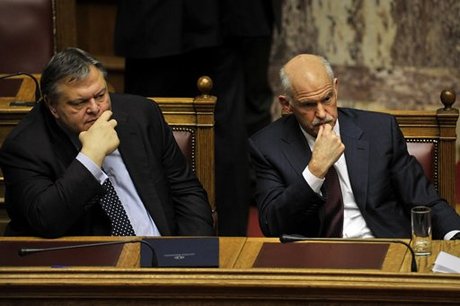 Eurozone finance ministers regroup Monday to pressure Greece to unite behind reforms in return for aid vital to its financial survival, and boost the firepower of a bailout fund to protect Italy.

As Greek Prime Minister George Papandreou scrambles to form a coalition government, the eurozone is holding back the next slice of aid, eight billion euros ($11 billion), until rival parties back a new eurozone rescue package.

"We are still at the same point. The Greeks must prove that they will really fulfill the conditions" to receive more bailout money, Belgian Prime Minister Yves Leterme told RTBF television.

Finance ministers meet after a turbulent few days during which Papandreou barely survived a confidence vote in Athens and angered his European partners with a now defunct bid to hold a referendum on the bailout deal.

The drama in Athens broke a taboo as European leaders lost their patience, telling Papandreou his country must choose between leaving or staying in the eurozone.

The political brinkmanship overshadowed a G20 summit in Cannes, France, at which world leaders failed to garner international aid for Europe while Italy accepted the embarrassment of being put under IMF supervision.

EU president Herman Van Rompuy said Greece had made "enormous efforts" so far, "but for us to continue to show our solidarity through financial aid, the parliament must approve the new plan" agreed at a eurozone summit last month.

He urged Greece, after the G20 summit on Friday, to "rapidly recreate a climate of political stability."

"We call on all political forces to contribute to finding a national consensus because the stakes are fundamental and existential for Greece," Van Rompuy said.

The eurozone finance ministers "will certainly reiterate their desire to see all the main parties subscribe to the adjustment program," said a European government source.

The ministers had agreed two weeks ago to release eight billion euros in loans, part of a 110-billion-euro bailout from last May. Greece needs the cash by mid-December to avoid a disastrous default.

But the installment is on ice until Athens endorses a new rescue package approved at an October 27 summit. In return for 230 billion euros in new loans and voluntary bond losses by banks, Greece must undergo strict austerity.

The spotlight is also on Italy after Prime Minister Silvio Berlusconi accepted to have IMF officials join the European Commission in overseeing the country's implementation of measures needed to reassure nervous markets.

Italy, the eurozone's third economy, has worried European leaders as its borrowing costs have soared over six percent, near levels that forced Greece, Ireland and Portugal to take EU-IMF bailouts.

"We expect the Italians to live up to their word with concrete actions," the European government source said, amid pressure on Berlusconi to take steps to reduce Italy's 1.9 trillion euro debt.

At a summit last month, eurozone leaders agreed to boost their bailout fund by "leveraging" its capacity from 440 billion to one trillion euros, via a debt insurance scheme and an investment vehicle to attract foreign investors.

The eurozone is hoping that emerging powers such as China and Brazil will come to its rescue, possibly through the IMF, which is sending officials to Monday's talks.

While the G20 summit agreed in principle to increase IMF funding, the leaders failed to come up with any precise figure or timetable for now.

"Initially the idea was for the (European Financial Stability Facility) to be ready by the end of the year, but we want to accelerate the work because of the market uncertainty and the situation in Greece," an EU official said.