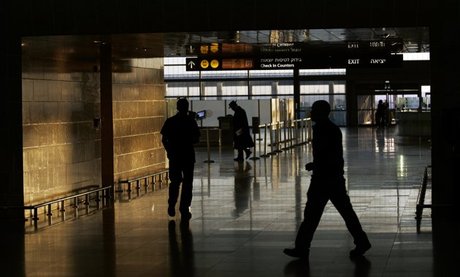 Israel was hit by a brief general strike on Monday that affected hospitals, banks, ports and the country's main international airport, but which ended after just four hours.

The strike shut down all government offices, universities, ports, post offices and the Tel Aviv stock exchange for most of the morning following a dispute over the working conditions of hundreds of thousands of contract workers employed by the government.

It also paralyzed the country's main international airport near Tel Aviv for two hours from 8:00 am (06:00 GMT), although operations resumed two hours later.

Hospitals were staffed on a sabbath footing, as were public utilities, including the electricity board, trains were a halted and buses were only operating on a limited basis.

With public transportation reduced, many people could be seen flagging down private taxis or sheruts (shared taxis) in order to get to work, while others drove, causing huge traffic jams, Agence France Presse correspondents and media reports said.

The strike, which began at 6:00 am (04:00 GMT), had been due to continue indefinitely but its scope was limited to four hours following an all-night session by the National Labor Court which met after the collapse of talks between the powerful Histadrut trades union and the finance ministry.

In an early-morning ruling, the court ordered the Histadrut to resume talks with the treasury in order to find a solution to the issue of contract workers, and ordered both parties to report back on their progress by midday on Thursday.

Shortly after the strike ended, union boss Ofer Eini said the Histadrut would continue to fight for an end to the government's widespread practice of employing contract workers, who enjoy fewer rights and protections than civil service employees who are covered by collective bargaining agreements.

"The struggle for contract workers has only just begun," he said in a statement.

"We are determined to continue in order to reduce the phenomenon and we hope that the government and businesses will use these days granted by the court to conduct real and intensive negotiations to reach an agreement."

In its ruling, the court said that restricting the duration of the strike to four hours could help "advance the negotiations and allow dialogue which may bring about a negotiated resolution," media reports said.

The Histadrut has accused the government of massively increasing its use of contract workers and is demanding it offer hundreds of thousands of them coverage under the civil service's collective bargaining agreement to ensure they benefit from the same rights and protections as their colleagues.

Until now, talks with Finance Minister Yuval Steinitz have stalled over the numbers, with the government warning it would not take any measures that could endanger Israel's economy, although expressed a willingness to increase the minimum wage paid to contract workers and increasing their rights.

Union spokesman Eyal Malma said the strike was intended to protest "the second class status of hundreds of thousands of Israelis working in the public sector and some private companies.

"The use of these workers, who do not benefit from the same social rights and are underpaid, has become a veritable epidemic to which we must put a stop," he told AFP on Sunday.

The number of contract workers, who can be fired without notice and lack many holiday and other entitlements, had mushroomed to the extent that it was difficult to know how many people were now affected, he said.