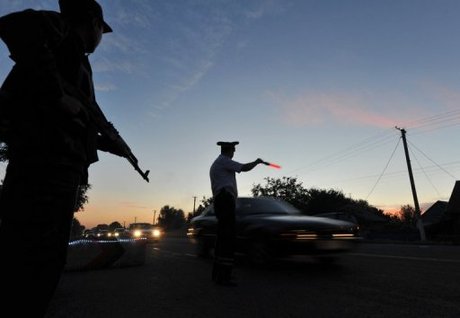 Security services in ex-Soviet Kyrgyzstan said Friday they had killed two members of what they claim was the cell of an international terror group during a nightime raid in the capital Bishkek.

The Kyrgyz State Committee for National Security (SCNS) refused to name "the international terror group" but said the two dead terror suspects were responsible for "particularly serious crimes" in the Central Asian state.

"The criminals put up fierce armed resistance and were eliminated," the SCNS statement said, adding the raid had taken place Thursday night.

"The cell members that were killed were involved in a number of particularly serious crimes including the murder of a policeman in the 8th district of Bishkek."

A 26-year-old policeman, Aktilek Abduvaliev, was shot dead after attempting to check the documents of two people who later escaped on bicycles last month, authorities said.

The raid was one of several deadly clashes this year between government forces and suspected extremists in the country of six million that has experienced two revolutions since independence in 1991.

At least 500 Kyrgyz citizens including 122 women have joined up with the Islamic State group fighting in Iraq and Syria, the interior ministry said last month.

But Kyrgyzstan and the other majority Muslim countries of Central Asia have come under fire for using a purported terror threat to silence criticism of their secular regimes.

Rashot Kamalov, a popular imam from the country's volatile south, is currently serving a 10-year sentence on extremism charges after state prosecutors claimed his sermons showed support for extremist groups in the Middle East.

Kamalov, known as a stern critic of the government and its approach towards practicing Muslims, has said the charges have no basis.