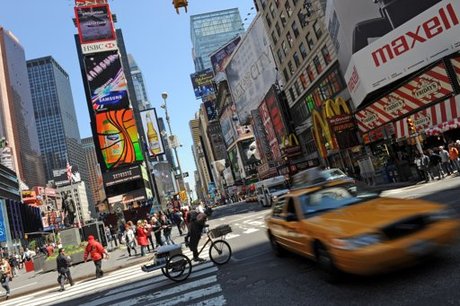 By soft-pedaling patriotism, the newly-formed U.S. national tourism board tasked with getting more tourists -- and their money -- onto U.S. soil is reinventing the nation as a hip new land of diversity and possibilities.

"We're rebranding America for the first time," said Jim Evans, chief executive of the Corporation for Travel Promotion, ahead of the World Travel Market that opened Monday in London.

"Over the last 10 or 12 years, people have seen America as unwelcoming as we've focused on security ... and our competition (from other countries) is fiercer than it's ever been before."

The United States made $134.4 billion off international tourism in 2010, when a record 60 million tourists came to visit, according to figures from the U.S. Commerce Department.

But the majority of those visitors came over the border from Canada and Mexico, including day trippers. Only six percent came from Britain, five percent from Japan, three percent from Germany and two percent from France.

The United States also trails France as the premier tourist destination -- and it's nowhere near tapping the full potential of the Asian market, after just 1.45 million Chinese and Indian visited last year.

Mindful that tourism already counts for 2.8 percent of gross domestic product and 7.52 million jobs, Washington sees the industry as a relatively fast and easy way to snap the economy out of its post-recession blues.

"The growing middle class in Asia is driving a lot of this," said Evans at the Corporation for Travel Promotion's not-yet-fully-furnished offices in downtown Washington.

One hurdle has little to do with image, and everything to do with bureaucracy -- a byzantine U.S. visa application procedure that can take weeks to complete, including fingerprinting and interviews at an embassy or consulate.

Under a visa waiver scheme, most Western Europeans -- plus Japanese and Australians -- can avoid the byzantine process, but they still need to pay $14 to enter the United States.

"If we institute a smarter visa policy, we can create 1.3 million U.S. jobs" and add $859 billion to the economy by 2020, Roger Dow, chief executive of the U.S. Travel Association, representing the travel and tourism industry, has said.

Legislation passed in March 2010 set up the Corporation for Travel Promotion -- which is renaming itself Brand USA -- to spearhead marketing efforts which historically have been fragmented among individual states and businesses.

Central to that message is a pixelated "USA" logo, unveiled Monday in London and a world away from the Stars and Stripes, that is meant to represent what the corporation calls "the United States of Awesome Possibilities."

"It is not about patriotism, flag-waving or chest-beating," says the corporation in a capsule explanation of the design. "It is meant to be welcoming, unexpected and inclusive."

Full-fledged marketing campaigns are scheduled to begin in March next year, tailored to each market and focusing on the great outdoors, urban excitement, culture and "indulgence."

"We have to rekindle the romance with the United States," Chris Perkins, chief marketing officer at the Corporation for Travel Promotion, told Agence France Presse.

"It pains me, as a proud American, but we're viewed as arrogant and brash, and we've never been out there saying: 'Please come'."

They should start by becoming civilized at their boarders. Millions of people are put off just by the thought of having to get processed at airports in a way that shames the harshest of dictatorships. It is a country that had placed its citizens of japanese descent in concentration camps during WWII in the name of security after all.