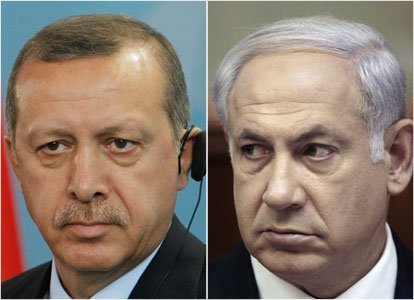 Seeking to make up for drastically worsening ties with neighbors Iran and Russia as well as bolstering its energy security, Turkey is moving to restore full relations with Israel after falling out more than five years ago.

NATO member Turkey was for years seen as the main Muslim ally of Israel, but ambassadors were withdrawn following the deadly storming by Israeli commandos in 2010 of a Turkish aid ship bound for Gaza.

But in a surprise announcement, Israeli officials said Thursday that initial understandings had been agreed with Turkey at secret talks in Switzerland on normalizing ties.

Turkish officials said no agreement on reconciliation had yet been reached but confirmed for the first time that the discussions were making progress.

Erdogan, a stout defender of the Palestinian cause, in July 2014 was accusing Israel of "keeping Hitler's spirit alive" over its offensive in the Gaza Strip that summer -- incendiary comments that infuriated Israeli Prime Minister Benjamin Netanyahu.

But this week he said: "We, Israel and the Palestinians and the region have a lot to win from a normalization process."

The about-turn has come amid a drastic worsening of ties between Turkey and Russia following Ankara's downing of a Russian warplane over Syria on November 24, which has wrecked several joint cooperation projects including on energy.

"During the past few years, we heard a number of times that Turkey and Israel were about to mend their relations, but each time the process collapsed," said Marc Pierini, visiting scholar at Carnegie Europe.

"This time around, there are a number of reasons for both countries to make a fresh effort," he told AFP.

He said Turkey was confronted with "a largely stalled Middle East policy... It needs some real positive news."

Turkey's Prime Minister Ahmet Davutoglu coined the phrase describing Turkish foreign policy as "zero problems with neighbours", a comment that is now roundly mocked as Ankara faces troubles on almost all its borders amid the Syrian civil war.

With President Vladimir Putin in no mood for forgiveness, the dispute with Moscow is of major concern for Ankara, which relies on Russia for over half its natural gas imports.

Despite delays, Israel is set to become an important supplier of natural gas once its 18.9 trillion cubic feet Leviathan gas field begins production, a development Turkey is closely watching.

"Israeli gas could be a serious game changer while Turkey is having problems with its biggest gas supplier Russia," said Ozgur Altug, chief economist of BGC partners in Istanbul.

Verda Ozer, foreign policy commentator at the Hurriyet newspaper, said the sudden progress was due to "the changing dynamics in the region and the new balance of power".

"The gas dispute with Russia and joint energy projects that could be halted forced Ankara to seek alternatives," she wrote Friday.

According to Israeli officials, the start of talks on gas exports to Turkey is a one of the key points in the plan for a deal on normalizing ties.

Israel will also compensate victims of the 2010 raid on the Mavi Marmara ship that left 10 activists dead, but Turkey will drop all legal proceedings over the issue, according to Israel.

The reconciliation is not yet a done deal. A senior Turkish official said Friday the two sides had not signed an agreement but were nearing a final framework.

"There is tangible, positive progress," said the official.

Relations were damaged but never entirely broken. Trade doubled in the period from 2009 to 2014, while Israeli tourists are again returning to Turkey.

The reconciliation will also please the European Union, NATO and above all the United States, which in 2013 brokered an Israeli apology for the Mavi Marmara incident but not a final deal.

Pierini said that in 2016 Turkey could also be seeking "good news" on ending the four-decades division of Cyprus and the dispute with Armenia over whether Ottoman-era killings constituted genocide.