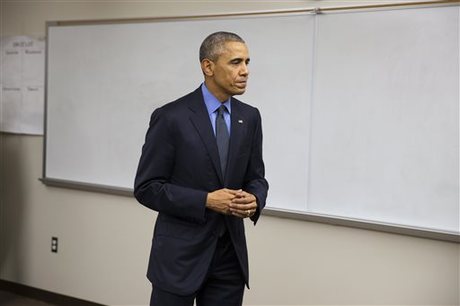 President Barack Obama met late Friday with families of the victims of the San Bernardino shooting, saying they represent the strength, unity and love that exists in the United States.

Obama, who was accompanied by his wife Michelle, also praised the relatives for efforts to promote tolerance in the wake of the attack.

The mass shooting on December 2 left 14 people dead and 22 wounded in what is being investigated as a terror attack.

Obama stopped in California en route to Hawaii for a family Christmas vacation, spending nearly three hours with those who lost loved ones and first responders who rushed to the scene of the rampage.

"As difficult as this time is for them and for this entire community, they're also representative of the strength and the unity and the love that exists in this community and in this country," Obama said.

"And as we go into the holiday season, even as we are vigilant about preventing terrorist attacks from happening, even as we insist that we can't accept the notion of mass shootings in public places and places of work and worship, we have to remind ourselves of the overwhelming good that exists out there."

Speaking at Indian Springs High School, Obama added that despite what they were going through, the families "could not have been more inspiring, and more proud of their loved ones, and more insistent that something good comes out of this tragedy."

"And many of them are already taking initiatives to reach out, to speak out on behalf of community and tolerance and treating people with respect," he added.

"It was a reminder of what's good in this country."

The carnage at a social services center was carried out by U.S.-born Syed Farook and his Pakistani wife Tashfeen Malik.