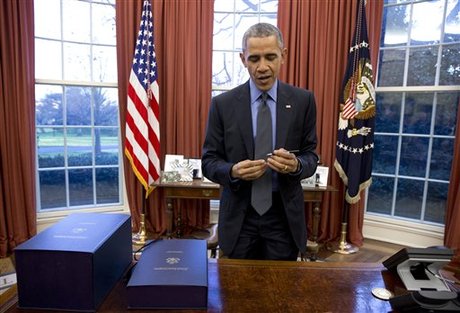 Barack Obama has reveled in defying predictions that 2015 would make him a lameduck president, but securing his final year goals -- from closing Guantanamo to enacting gun control -- will test the limits of White House power.

The last year of a U.S. presidency can be a pitiful thing.

Many a commander-in-chief who bestrode Washington like a political Colossus can struggle to command much at all. New crises erupt, and victories won in the spring of an administration unexpectedly provoke a winter of discontent.

In their final years, George W. Bush watched the economy fall off a cliff, Ronald Reagan was ensnared by the Iran-Contra scandal, Bill Clinton was impeached and Woodrow Wilson had a stroke.

For Obama, a long-avoided morass in Syria and a costly quagmire in Iraq may come to define 2016, as fears grow about the threat from the Islamic State group.

But Obama has offered Americans an alternative vision for his own eighth and final year in the Oval Office.

"I've never been more optimistic about a year ahead than I am right now," he said before heading to Hawaii for an end of year family vacation.

Obama has proved himself remarkably adept at cauterizing the loss of power.

In 2015, he thwarted a recalcitrant Republican-controlled Congress to reach a landmark nuclear deal with Iran and inked a global environmental accord that, in his words, can begin to "solve the climate crisis."

He watched the Supreme Court enshrine gay marriage into law and tentatively agreed a vast trans-Pacific trade deal that gives teeth to his "pivot to Asia" and could shape geopolitics in the Pacific for generations.

His approval ratings -- although dented by fears about Islamic State terror after the San Bernardino attack -- are around 45 percent, higher than Bush's and roughly the same as Reagan's at the same point.

In 2016, Obama will try to keep momentum by deploying all the tools and trappings of office -- from the bully pulpit to high-profile presidential visits.

His voice will echo across the 2016 campaign, as he hits the road in support of expected nominee Hillary Clinton and a Democratic third term that would emboss his presidency.

Before that, he is likely to become the first sitting president since Calvin Coolidge to visit Cuba.

But even that short trip across the Strait of Florida illustrates how much Obama's final year success is out of his hands.

A trip to the land Fidel Castro would be rich in symbolism, an echo of Reagan's first visit to the Soviet Union in 1988, or Richard Nixon’s visit to China.

But without Congress's willingness to end the embargo on Cuba, a visit would not thaw the last frosty remnants of the Cold War in the Americas.

Equally, ratifying the landmark trans-Pacific trade deal still requires reluctant Democratic lawmakers to vote in favor. That may have to wait until after the November election.

Publicly, at least, Obama is optimistic about dealing with the opposition-dominated Congress, even after being repeatedly burned -- even if it is an election year, and even if disdain for the 44th president is a rare issue upon which Republicans can all agree.

Yet recent agreements on taxes, the budget and early childhood education have left the White House more hopeful that progress can be made on issues like criminal justice reform.

It is a cruel irony that America's first African-American president has struggled to improve race relations, or address sentencing laws that see a disproportionate number of young black and Hispanic men go to prison.

"There is a confluence of interests, I believe the time is ripe for this issue," said a senior administration official, speaking on condition of anonymity. "There is a process and it is on track."

Obama is even holding out hope, however unlikely, that congressional Republicans will relent in their opposition to gun control and on closing Guantanamo.

On both issues, the White House is already considering executive orders to bypass Congress and enact reforms, something that would ignite a political and legal firestorm.

Obama's efforts to bring a generation of immigrants out of the shadows offers a preview of what those fights could look like.

Experts predict lengthy court battles and a possible political backlash, all of which could leave supporters in limbo and a key Obama policy goal in the hands of the Supreme Court.

Meanwhile, the president's perceived excessive use of executive orders could alter the delicate balance of power in Washington.

"We don't want to be like Bush," said an official who recently left the Obama administration, discussing the problems of closing Guantanamo by executive order.

But neither does Obama want to run out the clock on his presidency.