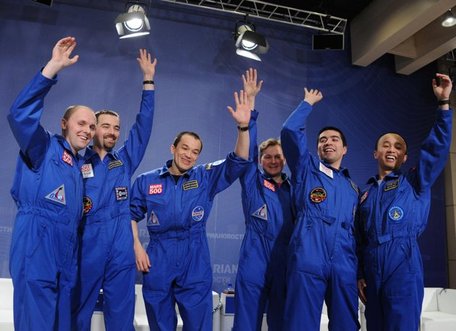 Six men who spent 520 days in isolation in Moscow to simulate a flight to Mars on Tuesday spoke of their pride at becoming "spacemen" but complained of the monotony and cravings for crusty baguettes.

Wearing blue jumpsuits and badges with the project name Mars 500, the international team of one Chinese, one Italian, one Frenchman and three Russians said they were proud of their "flight" in a Moscow car park.

"I wanted to enter this big world of space and seeing all the people who are here and being with my colleagues here, I feel like I am part of this world now and it feels great," Frenchman Romain Charles said at a news conference.

The group entered the wood-lined complex outside a city institute in summer 2010 for an experiment designed to test humans' physical and emotional reactions to a long spaceflight. They emerged blinking in the sunshine on Friday.

After quarantine ended late Monday, they are now living outside in Moscow for a final month of tests.

The men played down any tensions during their incarceration.

"We never had conflicts together as a crew," Charles told journalists. "But we had some moments, of course, when we didn't agree ... some cultural differences."

The worst problem was the monotony, which reached its height on the "return trip", after the excitement of a simulated landing on Mars, he said.

"The guys are great, they are very friendly, but there is not a lot of social variety," agreed Italy's Diego Urbina.

The worst gripe was the boring food.

The astronauts were only allowed to drink "powdered wine," Charles said. "As a Frenchman, I'm sorry to say ... it was not wine."

"The food for me was not enjoyment, not entertainment, it was for avoiding starving and giving me energy. It was like an experiment," China's Wang Yue, a doctor, told Agence France Presse, complaining that it gave him flatulence.

And Urbina described one of his first pleasures on emerging as fast food.

"A hamburger with potatoes and Coke. That was fun!" he said.