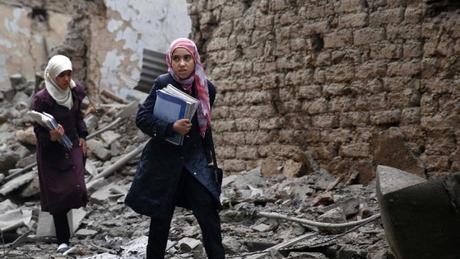 The kingdom recently brought Syrian political and armed opposition factions together for unprecedented talks in Riyadh, the culmination of months of manoeuvring by the Sunni Muslim power.

Days later, the kingdom gained world attention by announcing the surprise formation of a 34-nation coalition against Islamic "terrorism".

Foreign Minister Adel al-Jubeir said there were even "discussions among countries" including his, about possibly "sending some special forces in Syria".

"Saudis' plan has to do with Iran," said a foreign diplomat who considers both the Saudi-led coalition and the Riyadh talks as part of the same strategy.

"The Russian engagement or intervention, despite how limited it is, added a certain dynamic to the Syrian situation," he said.

Diplomats said the coalition was partly in response to Western criticism that Saudi Arabia does not do enough to fight extremists such as the Islamic State (IS), a Sunni extremist group that has seized large parts of Iraq and Syria.

Although the coalition is not -- at least for now -- structured to take any military action, Riyadh will offer to use its position as lead Sunni state to defeat IS, "but only if the post-conflict political order in Iraq and Syria weakens Iran's influence", and Sunnis in those countries are empowered, said U.S.-based political risk research firm Eurasia Group.

The kingdom's concerns deepened following an international agreement in July that, perhaps as early as January, will ease sanctions on Iran in return for a reduction in its nuclear capabilities.

Before Iran can increase its power as the economic embargo eases, Saudi "wants to gather its friends and allies," the foreign diplomat said.

The nuclear deal accentuated concerns in Saudi Arabia and the Gulf that Washington has not paid enough attention to what they see as Iran's destabilising acts.

- A destabilising 'cesspit' -"The general recognition seems to be that if you want something done you can no longer rely on others," said a second diplomat, from a Western country.

Regional competition with Iran plays "a huge role" in Saudi opposition to Assad, he added.

Saudi Arabia is "very much active because the Syrian conflict is approaching what seems like a conclusion and the kingdom is needed at this particular moment," said Khashoggi, expressing his personal view.

Saudi Arabia has repeatedly denounced international "terrorism" and has itself suffered attacks by IS, also known as ISIS, over the past year.

The kingdom was founded on the teachings of fundamentalist cleric Mohammed bin Abdul Wahhab, whose thought has been accused of fuelling deadly Sunni extremism around the world.

Finally they came together in Riyadh to prepare for potential negotiations early next year with the Assad regime, part a process endorsed last Friday by the UN Security Council.

Diplomatic pressure to end the war has intensified in the past few weeks, led by the 17-nation International Syria Support Group which includes Saudi Arabia as well as Iran and Russia.

Saudi Arabia is among the most vociferous in insisting that Assad can have no role in Syria's future and must go at the start of the political transition process.

Asked why Syria is so important for the kingdom, the Western diplomat described it as "a cesspit" destabilising the region.

"Arguably if you had no Syria (war) there might be no ISIS," he said.