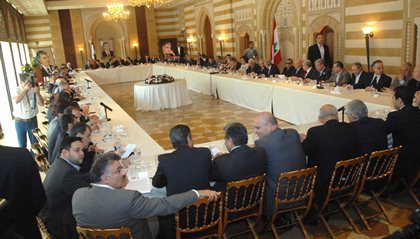 The March 14 coalition held a meeting on Tuesday night to address the latest political developments in Lebanon, most notably the ongoing vacuum in the presidency, reported al-Joumhouria newspaper on Wednesday.

Mustaqbal parliamentary bloc chief MP Fouad Saniora told the gatherers at the Center House in downtown Beirut that he hopes that the upcoming national dialogue sessions would turn into “productive” meetings that tackle issues that concern the Lebanese people, especially the vacuum.

The last dialogue session of the year was held on Monday with the participants hoping that cabinet work would be revitalized.

The March 14 officials also addressed Mustaqbal Movement leader MP Saad Hariri's initiative to end the deadlock, with Saniora saying: “The proposal has not developed into an initiative. Had it been so, stances much more severe than the ones we have seen would have emerged.”

“Hariri sought to speed up efforts to end the vacuum,” he added of the lawmaker's push to nominate Marada Movement leader MP Suleiman Franjieh as president.

The proposal has been met with reservations from other March 14 members, including the Kataeb and Lebanese Forces.

LF chief Samir Geagea is a presidential candidate and Hariri's nomination of Franjieh, a member of the March 8 camp, has created tensions between the two allies.

Interior Minister Nouhad al-Mashnouq hoped during the March 14 coalition meeting that Hariri's proposal “be kept under assessment from a realistic position to put an end to the paralysis in the country.”

LF MP Georges Adwan reiterated his party's rejection of the proposal, questioning the “goals, not the intentions, behind it.”

Other members of the coalition also voiced their rejection of Hariri's proposal, added al-Joumhouria.

Hariri's suggestion was also met with reservations from the March 8 camp, whose Change and Reform bloc chief MP Michel Aoun is presidential candidate.

Franjieh is also a member of the camp and his nomination has sparked tensions with Aoun.

"Anybody, but not Him"

Mixing politics with religion. Must be Hezbollah

Hezbollah trolling this article with its thumbs down

Thumbs down? Do you doubt that Iran is running both operations under the same paradigm? Of course it is and it is working odd of the Israeli model. They are using Israel's playbook against Israel and now against Lebanon herself.