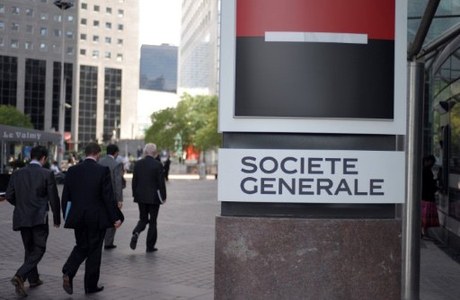 French bank Societe Generale said on Tuesday it was scrapping its 2011 dividend and making a "significant" cut to bonuses after a tough third quarter owing to a Greek debt write-down.

Faced with a European Union requirement to boost its core capital ratio to nine percent of overall assets by the end of June, the bank said its board would propose not distributing a dividend for 2011.

The move will allow SocGen to save about 500 million Euros and will mark the first time the bank has not issued a dividend since its privatization in 1987.

"We are giving priority to the strengthening of the group's capital," CEO Frederic Oudea said in the statement, adding that this year would also see "a significant decline in performance-linked pay."

"What we had to do this quarter was to show that we were able to move forward to prepare" to meet the recapitalization requirement, SocGen financial director Didier Valet said.

Like larger French rival BNP Paribas, the bank said it had written down 60 percent of the amount of Greek sovereign debt it holds, the equivalent of 333 million Euros before tax.

Under a deal reached with Eurozone leaders last month to tackle the ballooning Greek debt crisis, banks have agreed to write down at least 50 percent of the debt owed by Greece and to boost their capitalization.

The bank said that it needed 2.1 billion Euros, against an initial estimate of 3.3 billion Euros, to meet the capitalization requirement by mid-2012.

It said it had sold 10 billion Euros in toxic assets between July and November at a pre-tax cost of 121 million Euros.

And it said it lowered its sovereign debt exposure to the troubled Eurozone countries of Greece, Italy, Ireland, Portugal and Spain (GIIPS) to a "particularly low level" of around 3.4 billion Euros by the end of October.

It said it had halved its exposure to GIIPS countries since the start of the year.

Given its moves, SocGen said it was "confident of being able to cover by June 30, 2012 the need to raise additional capital of 2.1 billion Euros... through its own resources, without having to make a call on public funds."

"A downward trend is inevitable," he said of the longstanding tradition of European banks investing massively in public debts.

The bank said in the last four months it has reduced its portfolio of assets difficult to sell due to the financial crisis by 10 billion Euros to 18.6 billion Euros, incurring a loss of 121 million Euros.

The bank had already booked major losses in 2008-2010 on the portfolio of mostly US stocks.

Societe Generale signaled in mid-September that it was reducing its activity in dollar-denominated business segments, such as aircraft financing, due to the tensions making it difficult for European banks to raise fresh funding in dollars.