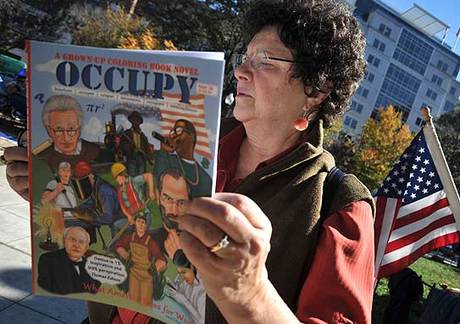 Anti-Wall Street protesters have a new way to pass the time: an "Occupy" coloring book complete with songs and a visit from Robin Hood.

The "grown-up coloring book novel" was released last week by Really Big Coloring Books, a Missouri-based publisher that recently made headlines with a controversial coloring book about the September 11, 2001 attacks.

"We think we're onto something with these cultural pieces that truly reflect what people want to hear and want to say," said publisher Wayne Bell.

The company's first big hit came when it published a Barack Obama coloring book just four days after he won the historic 2008 US presidential election. It also had a great deal of success with a coloring book about the conservative Tea Party movement.

The aim of the books is not to promote a particular political agenda, Bell said, but to give parents an outlet to discuss important issues and current events with their children.

"It's really an interesting reflection on what's going on out in the streets."

To keep the book balanced, Bell's teams spoke with people across the political spectrum about the Occupy movement and included two pages showing what pundits on the right and the left are saying about it.

To keep it fun, they included a maze, a crossword puzzle and a 1% Golden Bull Guilt Relief Form to help the rich donate their wealth to the needy.

The original songs are perhaps the best part.

Bell's favorite is "Sing a Song of Sixpence": Sing a song of sixpence; my pockets have gone dry. Nine & twenty A.P.R. why even try? The mortgage rate has opened, and I don't have a thing. Pitch a tent in the city park, my things I will bring."