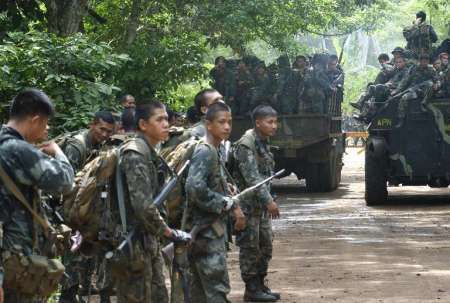 Two soldiers were killed in a pre-dawn attack by Islamic extremists in the conflict-racked southern Philippines on Monday, a local military spokesman said.

Jolo is a known stronghold of the Abu Sayyaf, a small band notorious for kidnapping foreign tourists and bomb attacks. The group recently pledged allegiance to Islamic State jihadists.

"It was a treacherous attack. They used the cover of night," Tan told AFP.

It was unclear how many attacked the 20 Marines manning the detachment in the remote village of Mapallam, he said.

An attack by a separate group of Muslim guerillas in the main southern island of Mindanao over Christmas left 10 civilians dead, according to the military.

Abu Sayyaf are holding two Canadian tourists and a Norwegian businessman abducted in the southern Philippines in September, along with a Dutch birdwatcher kidnapped in 2012.

They are also widely believed to be holding an Italian pizza restaurant owner snatched in the region in October.

The decapitated head of a Malaysian whom the group had kidnapped in May was found in Jolo last month.

Listed as a terrorist organization by the U.S. State Department, the Abu Sayyaf are responsible for the worst terrorist attacks in the Philippines, including the bombing of a ferry off Manila Bay in 2004 that killed over 100 people.