IS Gains and Losses in Iraq and Syria 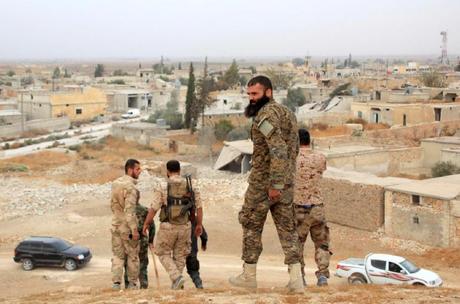 Following the Iraqi forces' victory in Ramadi, here is a recap of key cities and towns in Iraq and Syria seized by the Islamic State group or recaptured from them.

- IRAQ -RAMADI: This Sunni Arab city 100 kilometers (60 miles) west of Baghdad is the capital of Anbar, the country's largest province, which stretches from the borders with Syria, Jordan and Saudi Arabia to just west of the capital.

IS seized Ramadi in mid-May in an assault involving dozens of suicide bombers driving explosives-rigged vehicles. Iraqi troops retook Al-Tameem, a large area on the southwestern side of the city on December 8 with support from U.S.-led air strikes.

They reached the city center on December 22, and drove IS fighters from their last stronghold in a government complex on the 27th, effectively sealing victory.

TIKRIT: Hometown of late Iraqi dictator Saddam Hussein located 160 kilometers (100 miles) north of Baghdad. It was recaptured in April by Iraqi troops, police and Shiite-dominated paramilitaries. The operation, at that time the largest by Iraqi forces against IS, was helped by the fact that much of Tikrit's civilian population had fled the city.

SINJAR: Iraqi Kurdish forces backed by coalition strikes recaptured Sinjar, 400 kilometers (250 miles) northwest of Baghdad, from IS on November 13. That cut a key supply line to areas held by the jihadists in Iraq and Syria. IS captured Sinjar in August 2014 and carried out a brutal campaign against the Yazidi minority that included massacres, enslavement and rape.

BAIJI: This Sunni Arab town around 200 kilometers (120 miles) north of Baghdad and a nearby refinery, Iraq's largest, were recaptured by Iraqi forces in mid-October.

Baiji was the scene of some of the longest-running battles with IS in Iraq. It lies at a major crossroads and its recapture was seen as key to preparing the ground for offensives in Anbar and later Mosul.

MOSUL: Iraq's second-biggest city and capital of Nineveh province, it is 350 kilometers (220 miles) north of Baghdad. IS captured it on June 10, 2014 and proclaimed it part of an Islamic "caliphate" that stretches into Syria. Two million people lived there before IS arrived, but hundreds of thousands have since left. IS still holds the city.

- SYRIA -RAQA: A northeastern city with 300,000 inhabitants, Raqa has been IS' de-facto Syrian capital since January 2014. It is a major target of U.S.-led coalition forces, and to a lesser extent, of strikes by Syrian and Russian forces.

PALMYRA: This ancient Syrian city is 205 kilometers (130 miles) east of Damascus, and was taken by IS on May 21. The group has destroyed major archeological features there that were on UNESCO's list of world heritage sites.

KOBANE: A Kurdish city in northern Syria on the Turkish border. It became a symbol of the fight against IS and marked the group's first serious setback since it began to advance in the country in 2013. IS fighters were driven out of Kobane on January 26 after more than four months of fierce fighting with Kurdish forces backed by U.S.-led airstrikes.

The city, known in Arabic as Ain al-Arab, is the capital of one of three semi-autonomous "cantons" that were established by Kurds after the Syrian crisis began.

TAL ABYAD: Another city on the Turkish border, it was captured by Kurds on June 16, dealing IS one of its most serious defeats to date. Tal Abyad had 130,000 inhabitants when the Syrian conflict began in 2011, and controls a key supply route between Turkey and Raqa. IS fighters and arms regularly passed through the city before its recapture.