Rwanda's Kagame Says Will Run for a Third Term in 2017 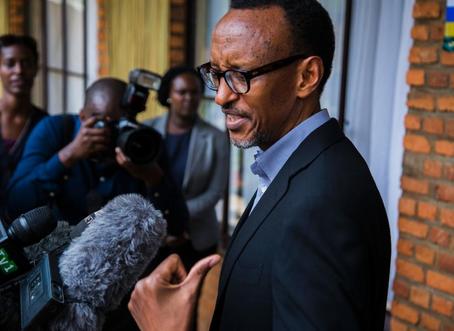 Rwandan President Paul Kagame said Friday he would run for a third term in line with a constitution amendment which won overwhelming backing in a referendum last month.

"You have asked me to lead the country after 2017. Given the importance you ascribe to this matter, I can only accept," he said in a televised New Year address.

"You clearly expressed your choices for the future of our country. The process allowed us the time to make certain that the proposed changes had merit and wisdom," said Kagame, who described national unity as "unshakably strong."

Thereafter, new rules will come into force enabling him to run for a further two five-year terms through to 2034, cementing his hold on a country he has effectively controlled since his rebel force ended the 1994 genocide which left some 800,000 dead.

But Washington and the European Union denounced the outcome as undermining democracy in the central African country and called on Kagame to step down in 2017 and allow new faces to emerge.

The referendum followed more than 60 percent of voters signing a petition calling for the drafting of constitutional changes which would allow Kagame to stand again.

Both houses of parliament are dominated by his Rwandan Patriotic Front (RPF).

Opponents and some international observers say Kagame has effectively stifled democracy in the nation of some ten million.

But his supporters maintain that Kagame, an English speaker from the Tutsi ethnic group targeted in the genocide by Hutu majority extremists, is not an autocratic figure but a beacon of stability who has overseen economic growth.

Kagame was elected with some 90 percent of ballots cast both in 2003 and 2010 and he said the outcome of the referendum would determine whether he continued in office.

Afterwards, he insisted he would stay put.

The party accused the regime of maneuvering to keep Kagame in office.

But earlier this year, more than 60 percent of voters signed a petition calling for constitutional changes to be drafted that would allow Kagame to stand again.

Kagame's aides have insisted that any bid for a third term would be in response to "popular demand" that he stay in power.

Such was the case in neighboring Burundi, which descended into bloodshed in April when President Pierre Nkurunziza announced his intention to run for a controversial third term in a July election that he went on to win.