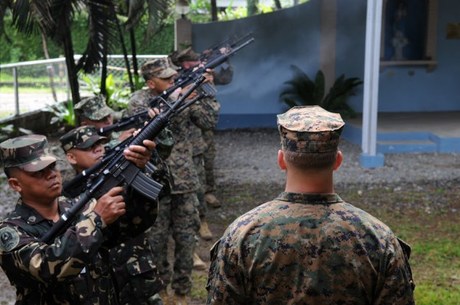 The Philippines is set to offer the U.S. military use of eight bases, a military spokesman said Wednesday, after the country's supreme court upheld a security agreement with Washington forged in the face of rising tensions with China.

The facilities include the former U.S. Clark airbase and air and naval facilities on the southwestern island of Palawan which faces the South China Sea, the focus of territorial disputes with China.

Military spokesman Colonel Restituto Padilla said the facilities would be used to store equipment and supplies.

He added that the offer had still to be finalized after the Philippine Supreme Court on Tuesday upheld a 10-year security accord.

The decision allows for the full implementation of the Enhanced Defense Co-operation Agreement (EDCA), signed in 2014 but not implemented due to legal challenges from groups opposed to U.S. military involvement in the Philippines, a U.S. colony from 1898 to 1946.

It will see more U.S. troops rotate through the Philippines for war games and help Manila build military facilities.

"We have resumed talks now that there is a go-signal that EDCA is constitutional," Padilla said.

"We are continuing talks and we will finalize the agreement on the locations," he said without giving a timetable when the decision would be reached.

The Philippines hosted two of the largest overseas U.S. military bases until 1992, when the senate voted to end their leases, a decision influenced by anti-U.S. sentiment.

The new pact does not authorize a return of U.S. bases.

China and the Philippines -- as well as Brunei, Malaysia, Vietnam and Taiwan -- have conflicting claims to the South China Sea which is a major shipping lane, rich fishing ground and potential source of mineral resources.

The Philippines has been seeking closer defense ties with the United States, accusing China of increased aggressiveness in the South China Sea.

In April 2012, after a tense stand-off with Philippine ships, Chinese vessels took control of a shoal just 220 kilometers (135 miles) off the main Philippine island of Luzon.