Thousands on Streets of Tunis for Revolution Anniversary 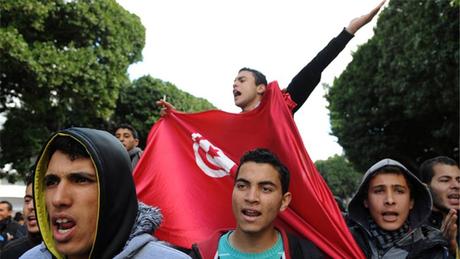 Thousands gathered in the Tunisian capital Thursday to mark the fifth anniversary of the overthrow of longtime dictator Zine El Abidine Ben Ali in the uprising that inspired the Arab Spring.

Tunisians thronged Habib Bourguiba Avenue, the main thoroughfare in central Tunis and the epicenter of the country's revolution five years ago.

Some attended political rallies, chanting revolutionary slogans like "Work! Freedom! Dignity!" and waving Tunisian flags, while others listened to concerts or reminisced about the uprising.

For many the anniversary raised mixed feelings, with fierce pride at the revolution tempered by concerns over continued economic problems and a rise in jihadist violence.

"The revolution did not help me in any way -- prices went up, many young people are still marginalized," Latifa, a 40-year-old seamstress, told AFP.

"But I came to celebrate anyway, because the revolution brought us some democracy, and that's important."

There was a heavy police presence at Thursday's celebrations, after Tunisia suffered a wave of deadly jihadist attacks last year.

Ben Ali stepped down on January 14, 2011 after tens of thousands of Tunisians took to the streets to oppose his 23-year rule, and fled to exile in Saudi Arabia, where he remains.

The revolution inspired similar uprisings in Egypt, Syria, Libya, Yemen and other Arab countries but only Tunisia is considered a success story of the Arab Spring.

Syria and Yemen have descended into civil war, Libya is wracked by political chaos and violence, and in Egypt the ouster of Hosni Mubarak was followed by unrest and eventually a military overthrow of his Islamist successor Mohamed Morsi, the country's first freely elected president.

Tunisia in contrast organized widely hailed elections in 2011 and 2014, adopted a new constitution and last year its National Dialogue Quartet -- a group of four civil society organizations -- was awarded the Nobel Peace Prize for helping to save its transition to democracy.

But the country has struggled to revive its economy, with poverty and unemployment still high.

There has also been a surge in jihadist violence since Ben Ali's overthrow, most dramatically in the attacks on the Bardo museum and on a Mediterranean resort last year that killed a total of 60 people, all but one of them foreign tourists.

"We are proud of the Tunisian exception, which dazzled the world. Tunisia broke once and for all with authoritarianism and tyranny," Prime Minister Habib Essid said in a statement to mark the anniversary.

"We are working together to fulfill the many demands of the revolution, especially the guarantee of a dignified life for all," he said, adding that "winning the war on terrorism remains an essential condition".

Essid last week announced a major cabinet reshuffle, amid growing public frustration at the lack of progress in improving the economy and at continued jihadist attacks.

Critics have raised concerns of a return to some of Ben Ali's authoritarian practices, with Amnesty International saying Thursday that the "human rights gains of the uprising are sliding into reverse gear".

Citing cases of deaths in police custody and alleged torture of detainees, the rights group called for investigations of the security forces.

"Torture and repression were hallmarks of former president Ben Ali's regime; they must not be allowed to become defining features of post-uprising Tunisia," Said Boumedouha, the deputy director of Amnesty's Middle East and North Africa program, said in a statement.