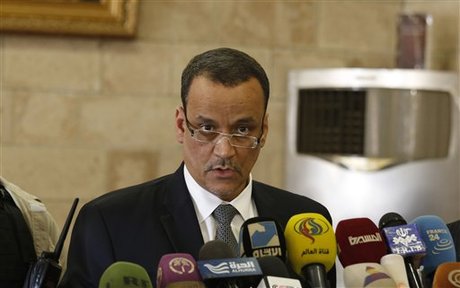 The U.N. envoy to Yemen left the rebel-held capital empty handed Thursday after a mission aimed at reaching an agreement for talks between the insurgents and the government.

"We have not set a new date for the next round of talks," Ismail Ould Cheikh Ahmed told reporters at Sanaa airport before departing the conflict-riven country.

The Mauritanian diplomat said he was alarmed by the "suffering of Yemenis", but he expressed hopes of a "quick return" to the negotiating table.

The Yemeni government sat down with the rebels and their allies last month in Switzerland for six days of talks that ended without a major breakthrough.

Ould Cheikh Ahmed had arrived in Sanaa on Sunday for a visit aimed at convincing the Iran-backed Huthi rebels and their allies to attend a new round of peace talks.

The envoy had met with government officials, who are temporarily based in Riyadh, before he headed to Sanaa.

Foreign Minister Abdel Malak al-Mekhlafi said Saturday that the talks initially scheduled to start on January 14 had been postponed until January 20 or 23.

The envoy said the rebels had taken positive steps during his visit, including the release of the Minister of Technological Education, Abdel Razzak al-Ashwal, a prominent member of the Al-Islah Sunni Islamist party.

Four other detainees, including activists and journalists, were also set free, he said.

He also said he received assurances about the condition of Defense Minister General Mahmud Sobeihi, who is being held by the rebels, as well as Nasser Mansour Hadi, a brother of President Abedrabbo Mansour Hadi.

More than 5,800 people have been killed in Yemen since the start of a Saudi-led bombing campaign against rebels, about half of them civilians, according to the United Nations.