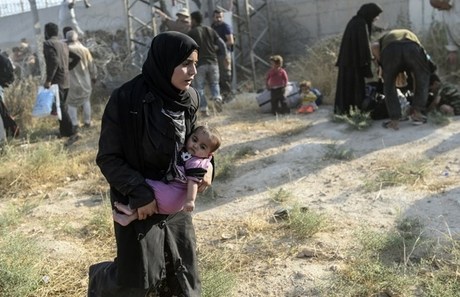 Turkey is to grant work permits to Syrian refugees, an official statement said Friday, in a key move which could allow Syrians to build more prosperous and stable lives in the country.

An announcement in Turkey's official gazette said that work permits would be granted to refugees who have fled to the country to escape the conflicts in their homeland.

It did not specify nationality, but the measure chiefly applies to the over 2.2 million Syrians who have fled the almost five-year conflict for the safety of Turkey, as well as some 300,000 Iraqis.

Refugees in Turkey are not allowed to work or be employed in the country without a valid work permit, the government decree published in the gazette makes clear.

New arrivals will able to apply for a work permit six months after they obtained a temporary protection status, the announcement said. The regulation also applies to those who have already resettled.

The number of refugees holding a work permit must not exceed 10 percent of the total number of employees at any workplace, it said.

Rights activists have long pressed Turkey to grant work permits to refugees -- most of them working illegally and for very minimal wages -- to allow then to build better lives in the country.

The measure would be welcomed by EU states as it might discourage the migrants from crossing illegally into the European Union in search of better lives.

Deputy Prime Minister Numan Kurtulmus said on Monday the move would "make life easier for Syrians" without putting a burden on employers.

Turkey has become a hub for migrants seeking to reach Europe and has on occasion been criticised by its Western partners for not doing enough to limit the numbers crossing the Aegean Sea.

Ankara and Brussels in November signed a plan to stem the flow by providing Ankara with three billion euros ($3.2 billion) of EU cash as well as political concessions for Turkish cooperation in tackling Europe's worst migrant crisis since World War II.