'You Betrayed My Trust': Al-Sayyed Severs Ties with Samaha 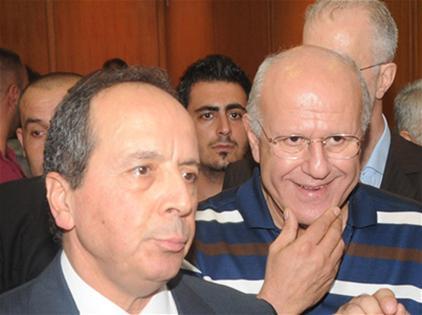 Former General Security chief Maj. Gen. Jamil al-Sayyed announced Friday the end of his friendship with ex-minister Michel Samaha, a day after the latter was released from jail under a controversial Military Court ruling.

“My support for ex-minister Michel Samaha's family was an ethical duty and a commitment not to leave them during the time of hardship,” Sayyed said in a tweet.

“Yesterday I responded to some top criminals who occupy posts in the State and in (Lebanese) politics, who shed false tears over the judiciary that released him,” Sayyed added, referring to statements that followed Samaha's release on Thursday.

However, the major general blasted Samaha for “betraying his trust.”

“Michel Samaha betrayed my trust and erred against me when he accompanied me from Damascus with him knowing what he was hiding in his car,” Sayyed said, referring to the explosives that Samaha smuggled in his car's trunk from Syria to Lebanon.

“From now on, let each pursue his own course, our friendship is over,” Sayyed added.

Both men are close to Syrian President Bashar Assad and to the Hizbullah-led March 8 camp in Lebanon.

Samaha, who was information minister from 1992 to 1995, was released in exchange for a bail payment of 150 million Lebanese pounds ($100,000), according the text of the Military Court's judgment.

Under his bail conditions, Samaha, 67, would be barred from leaving the country for at least one year, speaking to the press or using social media.

The ex-minister was arrested in August 2012 and charged with attempting to carry out "terrorist acts" over allegations that he and Syrian security services chief Ali Mamluk transported explosives and planned attacks and assassinations of political and religious figures in Lebanon.

Samaha was sentenced in May 2015 to four-and-half years in prison, but in June Lebanon's Cassation Court nullified the verdict and ordered a retrial.

Samaha, a former adviser to Assad, admitted during his trial that he had transported the explosives from Syria for use in attacks in Lebanon. But he argued he should be acquitted because he was a victim of entrapment by a Lebanese security services informer – Milad Kfoury.

As if you were not in on the plot!

Just a coincidence that you were car-pooling together?

Best buddies, and you didn't know anything about the bombs? Not likely....

Bashar didn't tell you about the bombs either??? Sure, we believe you..... not!

What are you talking about? The real crime is that he did not tell Al-Sayyed about the explosive. The hell to Lebanon and potentially hundreds of people that could have been killed.

“Michel Samaha betrayed my trust and erred against me when he accompanied me from Damascus with him knowing what he was hiding in his car,” Sayyed said, referring to the explosives that Samaha smuggled in his car's trunk from Syria to Lebanon.

Nice try, and that of course exonerates the tyrant ex head of the general security of being an accomplice to Smaha. Actually, he is even confirming that Smaha was transporting and hiding explosives in his car..:)

The people of Lebanon demand to know why Jamil Sayyed was never questioned by the joke of military court in the case of Michel Smaha.

The criminal Smaha is now costing us money as well as the security forces have to guard his house 24/7!

Just shows you what kind of a lowly being Sayyed is. Once Smeiha was arrested Sayyed allegedly learned that Smeiha was transporting explosives yet he stood by him and describes his actions as "“My support for ex-minister Michel Samaha's family was an ethical duty and a commitment not to leave them during the time of hardship,”

He calls it hardship. Blowing people up, plotting with a foreign country, and getting caught are times of "hardship".

'You Betrayed My Trust': Al-Sayyed Severs Ties with Samaha

I am almost tearful, almost!

The comedy show is ON. Why does Jamil Al Sayyed have to make such a public statement when he could have told his "best" friend in person it was the end of their friendship.

"Michel Samaha betrayed my trust and erred against me when he accompanied me from Damascus with him knowing what he was hiding in his car,” Sayyed said"

but...but... M8ers say that it is an invention of M14! that samaha was set up! oh! now sayyed is an M14 wahahaha! pityful M8ers logic.... but how can braindead people have logic anyway....

How Sad..... how loyal and trusting friendships all of a sudden come to such a disheartening and tragic end because of a fews pounds of high explosives.

you know @heroes; you're the kinda guy I want to be friends with. Do you ever venture out of Dahieh? If so, let me know.

oh @heroes, your kindness is truly overwhelming. I don’t know what it is but there is something about you that reminds me of 2 great legendary men : Sayyed Hassan for his openness and kindness and Sayyed Trump for his philanthropic nature. Can I call you MF, short for My Friend , can I?

@heroes
Can you give me a decent paying job in So. Calf?

@coolmec
I would if I could my friend.

@heroes
Thank you buddy. I was just joking. I already have a job here

I thought Jamil Al Sayyed worked in intelligence and it is surprising that he had no clue that the car he was in was full of explosives.
The commentator @warrior asked a good question: why did Al Sayyed go public. For his public image and most likely for the public prosecutor in the Hague.

Having said that I think Jamil Al Sayyed was one of the best managers in the Lebanese administration. As head of National Security, he overhauled services and procedures.
He was efficient and feared.