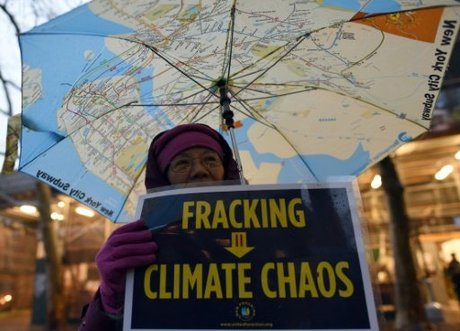 One earthquake is recorded on average each day in a western Canadian region where companies extract oil by fracking, according to statistics published by the Canadian province's energy regulatory agency.

The Alberta Energy Regulator (AER) said Friday that in the last year alone, there were 363 tremors in and around Fox Creek, a small town of 2,000 inhabitants located 260 kilometers (160 miles) northwest of Edmonton.

Some days, seismic activity is higher, such as on September 11, 2015, when a record 18 earthquakes were felt.

On Tuesday, a 4.8-magnitude quake on the Richter scale was recorded 30 kilometers west of Fox Creek, where Spanish firm Repsol SA is injecting liquids at high pressure into subterranean rocks to create fissures and extract oil and gas -- the process known as fracking.

Repsol confirmed it had been conducting fracking operations "at the time of the event."

The technology is widely used in Canada and the United States, helping to keep down energy costs. But some European countries ban it.

The AER has not confirmed a link between Tuesday's small quake and fracking in the region. Spokeswoman Carrie Rosa told AFP the agency is investigating.

Meanwhile, Repsol has halted operations and is awaiting an AER go-ahead before resuming fracking -- which is required for all seismic events of 4.0 or higher under new rules.

The company said it didn't know when operations will restart.

Local municipal authorities have warned of the environmental costs of large-scale oil extraction in this region rich in hydrocarbons.

"Industry and the provincial government (of Alberta) have been turning a blind eye to what has been going on in our area," Fox Creek Mayor Jim Ahn said in a letter to the AER.

"We have industry pulling water from our rivers, streams and lakes at rates we feel far exceed their capabilities to replenish themselves."

Water shortages have become a persistent problem, he said, adding that the municipality had to spend more than Can$300,000 (U.S.$206,000) to bring in potable water for its residents.

Rosa said the AER is working with the town to address its concerns. The agency, for example, immediately shuts down upstream extraction in the area when a quake of magnitude 4.0 or more has been felt.

But it said it hasn't confirmed yet whether or not the latest tremor had anything to do with oil and gas operations.

Officials in neighboring British Columbia province last August confirmed that in 2014 a Canadian subsidiary of Malaysian oil and gas giant Petronas had triggered one of the largest quakes ever linked to fracking at that point.

The British Columbia Oil and Gas Commission said it linked the operations of Progress Energy in the province's northeast to a 4.4-magnitude quake felt in Fort St. John in August 2014.

The commission said the quake was "triggered by fluid injection during hydraulic fracturing" by the company.

Amid growing concern about fracking, however, the U.S. Geological Survey last year said the extraction process is only occasionally the direct cause of major quakes.