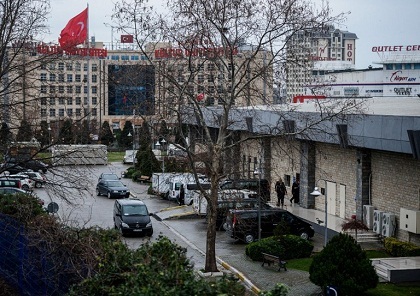 A Turkish court on Sunday charged ten people over the suicide bombing in the heart of Istanbul's tourist district that killed 10 Germans, media reported.

The ten, who were charged with belonging to a terrorist organization, were remanded in custody, the Dogan news agency said.

Six others who also appeared before the court in Istanbul were set to be released, Dogan added.

Authorities have said the attack was the work of a Syrian bomber from the Islamic State group.

Ten German tourists were killed and another 17 people wounded in the bombing in the historic center of Istanbul near the Blue Mosque and the Hagia Sophia, the towering former Byzantine church that is now a museum.

Turkish authorities have identified the bomber as a 28-year-old Syrian who entered Turkey on January 5 posing as a refugee, with Prime Minister Ahmet Davutoglu saying the man was a member of IS.

The suspects, whose nationalities were not disclosed, were also said to have links to the IS group.

Ankara has often been criticized by its Western allies for not doing enough to combat IS jihadists who have seized swathes of territory in neighboring Syria as well as Iraq.