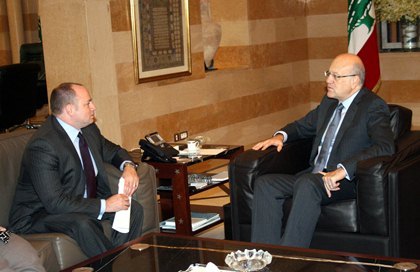 Conflicting reports emerged on Friday over the visit of U.S. Treasury Assistant Secretary for Terrorist Financing Daniel Glaser to Beirut.

An Nahar newspaper reported on Friday that the discussions that took place between Glaser and Lebanese bankers were positive.

Sources told the daily that the meeting focused on the technical sides of the banks’ transactions with Syria, adding that “the banking sector will not be targeted” by any sanctions.

They said that the visit was to “inquire the followed mechanism by (Lebanese banks) to ensure that there are no potential Syrian attempts to evade financial sanctions.”

However, al-Liwaa newspaper reported that the U.S. official stressed during his meeting with Prime Minister Najib Miqati, Lebanese Central Bank Governor Riyad Salameh and Lebanese Bankers that “the international community will not hesitate in imposing direct sanctions on the Central Bank if any Syrian money transactions were passed through it.”

According to An Nahar newspaper Miqati told Glaser that the Lebanese economy’s growth depends on the banking sector which is why no Lebanese would risk putting this sector in any danger.

For his part, Salameh stressed that the Lebanese banking sector is committed to the measures taken by the international community, ruling out any transactions or banking accounts between Lebanese Central Bank and Syria’s Central Bank.

“We are fully cooperating with the international community and implementing (the decisions),” president of the Lebanese banks association Joseph Torbey said.

Glaser emphasized on Thursday the need for Lebanon to take the necessary steps to ensure a transparent and well-regulated financial sector for Lebanon’s continued prosperity, according to a statement by the U.S. embassy.

He reiterated his country’s view that it is important to ensure that the current instability in Syria does not undermine the Lebanese financial sector.

The embassy said that Glaser also called for Lebanon to meet all of its international obligations, including cooperating with and funding the Special Tribunal for Lebanon probing the assassination of ex-Premier Rafik Hariri.

He renewed the commitment of the U.S. to a stable, sovereign and independent Lebanon.